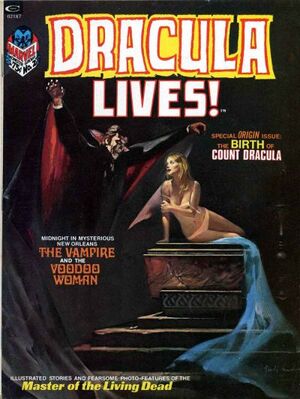 Appearing in "That Dracula May Live Again!"Edit

Synopsis for "That Dracula May Live Again!"Edit

1459: It is three years into the reign of Count Dracula, Prince of Transylvania, and Dracula is leading his army against the invading Turkish hordes led by the merciless Turac. It is a battle that Dracula and his armies fight valiantly, but lose, Dracula himself is mortally wounded in battle. Before one of Turac's troops can slay him on the battle field, Turac—recognizing Draucla as the tyrannical ruler of Transylvania who has a reputation as Vlad the Impaler, a cruel man who slays men, women and children despite the fact that he has a loving family all his own—stays his soldier's killing blow. Turac surmises that Dracula's reputation of evil cruelty would do them more good with Dracula alive and in their control than dead.

One of Turac's soldiers recommend they take Dracula to a gypsy woman named Lianda who is known for her ability to heal even the most gravely wounded individuals. Dracula is taken there and Lianda agrees to revive Dracula and tells Turac and his men to leave her to her work and tells them to return the next evening. Left alone, Lianda mocks mocks Dracula over his "friends" paying so much to revive him, decides that she will do their bidding but also in a means to pay Dracula back for all the years that he has given her people grief. Lianda is really a vampire, and she bites Dracula feeding upon him, knowing that her hated foe will be revived as a vampire.

After she is finished feeding, Lianda is interrupted by Turac who demands to see results before he gives her payment. When she tells him to come back the next day he refuses and she attacks him. Turac impales Lianda through the heart with a wooden spear killing her. Believing that the woman had done her job he takes the weakened Dracula away laughing at how he got what he wanted without paying the old gypsy.

Dracula revives some time later to find himself locked in his own dungeon where Turac mocks him by bringing Dracula his wife and son, Vlad. Turac threatens to harm both of them unless Dracula agrees to pledge his loyalty to the Turkish monarch who wishes control of the land. Dracula initially refuses to bow down to his enemies, however he buckles when Turac threatens to kill his wife, Maria. Turac leaves Dracula alone briefly with his wife and child, and Maria tells Dracula that while he was unconscious, Turac and his men had raped her before his unconscious body and begs for Dracula's forgiveness.

Hearing this Turac reenters the room and furiously demands that Maria go to "his" bed chambers. Refusing to be raped once more, Maria tries to get away from Turac, however in the scuffle she trips and strikes her head against the dungeon walls, the blow strong enough to kill her.

In a rage of fury over his wife's death, Dracula breaks free of his bonds and kills Truac's guard and then easily overpowers Truac himself. Realizing that he has been turned into a vampire, Dracula then feeds upon his enemy, draining him of all his blood.

When Turac's guards come to see what the commotion is all about they are put under Dracula's hypnotic spell and killed. After all of Turac's men have been destroyed, Dracula then takes his son and dead wife's corpse in his bat form. For young Vlad, Dracula leaves the boy with some gypsy's to care for, while he puts his wife's corpse to rest. After in the Transylvanian wilderness, stripped of all his clothes, Dracula swears to his late wife that all the world shall pay for her death, and it is such that the scourge of Dracula the vampire begins....

Synopsis for "Who Is Bram Stoker and Why Is He Saying Those Terrible Things About Me?"Edit

Appearing in "The Terror That Stalked Castle Dracula!"Edit

Synopsis for "The Terror That Stalked Castle Dracula!"Edit

1944: During World War II, Castle Dracula has become a base of operations for Nazi forces occupying Transylvania. The commanding officer on location of Hauptman Kriss and his Lieutenant Hanson. Hanson reports in and tells Kriss that their extermination of resident gypsy's has been going well however he feels uneasy about operation out of Dracula's castle and senses an aura of evil about the place. Kriss dismisses the "late" Dracula's story as nothing but gypsy superstition. Their talk is interrupted when a family of gypsy's are brought before him. The father warns of a rebellion and is ordered to be put in the stable (the only fitting place for him according to Kriss) and orders his young daughter to be brought up to his room for later. He then charges the gypsy's son to be his messenger boy. Kriss then resumes his work, happy with the fact that he has subjugated the people of the region.

This won't last long for Kriss, as Dracula has returned to Transylvania to find his home occupied by Nazi soldiers. Furious, Dracula goes out and attacks some of the soldiers that are guarding the castle, killing them all to be found by Kriss and his superiors. Seeing the bite marks on the necks of his men, thinking that this is some kind of gypsy trick order the father out of the stable and has him executed. Kriss returns inside the castle, unaware that Dracula still stalks outside. He goes to Valeria, the young gypsy girl and asks her if she would ever kill him if she had the chance. When she tells him she would, he shoots her dead in cold blood. As this is happening, Dracula continues to feed upon the nazi soldiers around the base.

Furious and continuing to blame the gypsy's for more of his men dying, Hauptman Kriss sends his men into the nearby village. There he orders his men to open fire and they exterminate the whole town. Returning to the castle, they find that yet another one of their troops has been killed. Furious, Kriss orders Hanson to drive a stake into the heart of the young gypsy boy in his command. Hanson is hesitant at first, but ultimately follows orders despite the boys pleas for mercy.

The following night, Dracula enters the castle and is found by Hanson. When Hanson shines a flashlight on Dracula he is shocked to see the vampire lord wearing his commanding officers uniform. As it turns out Kriss has been possessed by the spirit of Dracula himself and attacks Hanson. With no other choice, Hanson pulls out a wooden stake and impales his commanding officer through the heart, killing him. With Hauptman Kriss dead, Hanson takes command of his unit and leads them out of Castle Dracula.


Appearing in the 5st StoryEdit

Synopsis for the 5st StoryEdit

Synopsis for "The Voodoo Queen of New Orleans!"Edit

In New Orleans, a tour group is taken to an old cemetery where it is believed the bones of famous Voodoo priestess Marie La Veau has been laid to rest. When the tour group leaves to meet the dusk closure of the cemetery, a young couple decides to stay on the property for a moment of passion. They have the poor fortune to happen to make out in the very cemetery where Dracula had taken his daily rest and soon become his next victims, killing the man and feeding on his lover before smashing his way out of the cemetery and walking into town.

Dracula has been brought here due to a strong mystical call, walking through the meandering Mardi Gras revelers, Dracula brushes path with Simon Garth, the Zombie as he follows the mystic call. Dracula finds it's source in a home that is owned by the elderly and withered Marie La Veau, who in spite of her advanced age is very much alive.

Dracula finds that this is a trap set by La Veau and her would be lover, hoping that they can use Dracula's blood in a spell to reverse Marie's age. Using a cross and garlic to keep Dracula at bay as they explain what they are hoping to achieve, they create the potion using some of Dracula's blood and both drink from it. While Marie is restored to her youthful vigor, her would be lover realizes that he's been betrayed, as instead of becoming immortal he has only exchanged ages with Marie, withering away into old age and dieing. With the spell complete, Marie tosses away all the items used to keep Dracula at bay, confident that her mastery of Voodoo will be enough to protect her from Dracula.

Amused by Marie Le Vau's brutality and duplicity, Dracula bids her farewell and leaves the scene, declining her offer to a union wishing to pursue his own ends by himself.

Retrieved from "https://heykidscomics.fandom.com/wiki/Dracula_Lives_Vol_1_2?oldid=1423328"
Community content is available under CC-BY-SA unless otherwise noted.