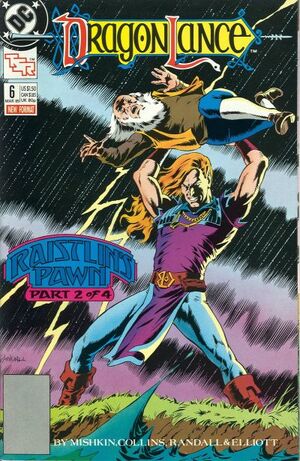 Gnatch the gnome and Kalthanan a dark elf are travelling together when they are attacked by river pirates. Kalthanan travels into town with a Dragon Army patrol that attacks the pirates, Gnatch is rescued by Myrella, one of the pirates. Raistlin Majere (wearing black robes) is asked to defend Kalaman from the Knights of Solamnia but says Takhisis has summoned him to Neraka, he flies away on his green dragon Cyan Bloodbane. Kalthanan is reunited in town with Gnatch and Myrella and the three escape on Gryffin back and fly to Neraka also.

Retrieved from "https://heykidscomics.fandom.com/wiki/Dragonlance_Vol_1_6?oldid=1424393"
Community content is available under CC-BY-SA unless otherwise noted.