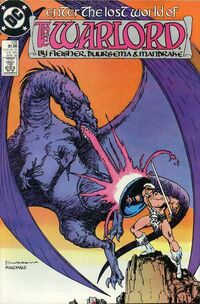 Universe
The Brave and the Bold , New Earth

Origin
As a magical creature most Dragons who have been encountered have either been summoned by a magic user or changed into one.
First appearance
Batman #5
(March, 1941)

History of this race is unknown.

Retrieved from "https://heykidscomics.fandom.com/wiki/Dragons?oldid=557475"
Community content is available under CC-BY-SA unless otherwise noted.