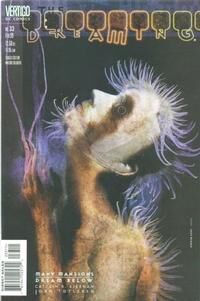 A chest of books has fallen beneath the floorboards during the ruin of the House of Mystery into a black liquid abyss populated by an aquatic species. Among this society there are heretics who threaten the status quo that there is no 'Above'. After a woman who occupies high social station is accused of being a witch, she is thrown into a dungeon cell. A monk who is entrusted with concealing the truth of objects which fall from 'Above' helps her escape from the cell and gives her one of the books from Cain's missing chest. Her dreams of the higher realm propel her onward, and she finally makes it all the way to surface in Cain's basement, despite being mortally wounded by attacks from several sea creatures. She slips beneath the water once more, but not before depositing the book where it came from. Cain is not that surprised by its return as he thinks all lost things show up eventually.

Retrieved from "https://heykidscomics.fandom.com/wiki/Dreaming_Vol_1_33?oldid=1425769"
Community content is available under CC-BY-SA unless otherwise noted.