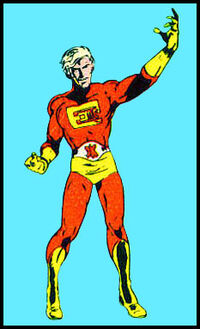 E-Man is a sentient packet of energy thrown off by a nova. Traveling the galaxy he learned about life, how to duplicate the appearance of life, and good and evil. Reaching Earth, he met exotic dancer/grad student Katrinka Colchnzski (who attended Xanadu University), also known as Nova Kane, and formed himself into a superhero dubbed E-Man, with a civilian identity dubbed "Alec Tronn" (electron). His emblem was the famous mass-energy equivalence formula "E=mc2", and his powers included firing energy blasts from his hands, changing his appearance, and transforming part or all of his body into anything he could envision (e.g., turning his feet into jet engines so he could fly).

Nova would later be caught in a nuclear explosion and gain the same powers as E-Man and become his partner; later still, she would lose her powers and become a normal human being again, only to regain her powers sometime afterward. During their early adventures they picked up a pet koala named Teddy Q, whose intelligence grew to the point where he had a job waiting tables in a cafe.

Retrieved from "https://heykidscomics.fandom.com/wiki/E-Man_(Alec_Tronn)?oldid=1610859"
Community content is available under CC-BY-SA unless otherwise noted.