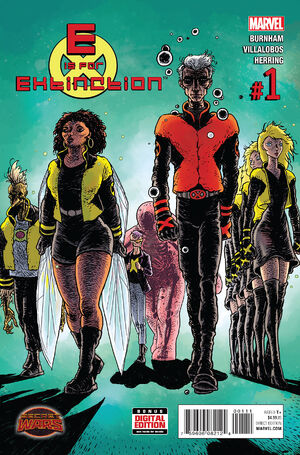 It's only natural. We are Homo superior after all. But in order to move forward, Mr. Quire, the entire world must acknowledge and come to embrace our superiority of their own free will. I wasted decades trying to set mutantking from humanity. What was I thinking.

Appearing in "Relax and be Replaced"Edit

• What happens when mutants prove they really are Homo SUPERIOR?

• What will happen to the X-Men when they fight for a world that wants to be them, rather than hate and fears them?

• And what exactly is Magneto doing running the Xavier institute??

Retrieved from "https://heykidscomics.fandom.com/wiki/E_Is_For_Extinction_Vol_1_1?oldid=1505966"
Community content is available under CC-BY-SA unless otherwise noted.