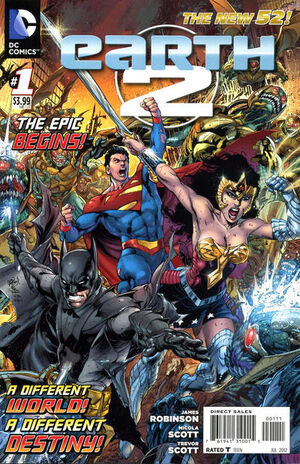 Yeah, makes me think how society always recovers... rebuilds... and soon the horrors of a war fade away like they never happened at all.

Appearing in "The Price of Victory"Edit

Synopsis for "The Price of Victory"Edit

Five years ago, they appeared in the sky: booming holes in space, spewing an army of monsters known as Parademons, and led by the villain Steppenwolf. Entire countries were destroyed, but Earth's defenders fought back. Chief among them were Superman, Batman and Wonder Woman.

In a last-ditch plan, Batman planned to infiltrate the towers that controlled the Parademons by uploading a virus that would cripple the towers one by one, and halt the creatures' destruction. Superman and Wonder Woman vowed to give him whatever help he needed, even if that meant laying down their lives.

In Metropolis, Superman and Wonder Woman made their final stands. Both were distracted by their personal losses, but both fought on, giving their friend the time he needed to do his job.

Meanwhile, Batman's daughter and sidekick Robin flew as wing-man for her father, guarding him with the Batplane's weaponry. Elsewhere, Supergirl guarded the nuclear devices that the world's governments had decided to keep to the very last. As she flew over New Guinea, she was watched by a squad of American soldiers led by Sgt. Al Pratt, guarded one such device.

In Metropolis, Wonder Woman was greeted by the messenger god Mercury, who told her the news that with Amazon Island destroyed, the gods of Olympus had taken up arms against the invaders. Unfortunately, they too have sustained significant losses. But throughout that loss, the gods would persevere. On that dark day, the gods were praying for mankind.

Finally, Superman and Wonder Woman found themselves facing the horde's vast numbers by themselves. As a swarm of flying Parademons held Superman back, he was forced to watch as Steppenwolf himself thrust his sword through Diana's chest, killing her. Superman swore vengeance, but the swarm had him, and he was utterly consumed in a flash of fire.

Elsewhere, Supergirl sensed that Superman had gone, and rushed back to Metropolis, leaving Pratt and his men to face another swarm of Parademons by themselves.

Fortunately, Superman and Wonder Woman's sacrifices allowed Batman the time he needed to infiltrate the tower and get to the console. Before he would upload the virus, he radioed up to his daughter and commanded her to get away. Helena was puzzled, as she had meant to pick him up after he finished his task. To her horror, Batman explained that he had never intended to escape the tower alive. Once the virus was in the system, the tower would self-destruct with him inside it. Helena cried out as her father was consumed by the explosion that would save the planet.

Supergirl caught up with Robin, and without any time to grieve their lost mentors and family, their attention was caught by a Boom Tube portal with a lone figure appearing within it. The Earth's last two remaining heroes plunged into the portal and were never seen again.

As of the present day, these events are public fact, and Galaxy Broadcasting Corporation CEO Alan Scott was moved enough to provide his own voice for the narration of the record - which he released for free. Glancing out the window of his plane, Alan and his assistant Sarah can't help but feel that what happened to the earth is something that the planet itself wants its inhabitants to remember.

In Lansing, Michigan, Jay Garrick is in a state of denial about the end of his relationship with fellow graduate Joan Williams. She senses that his life isn't going anywhere, and with their education coming to an end, she considers him dead weight. He helps her pack for her job at Tyler-Chem on the West Coast, but her obvious disinterest in even sharing a state with him upsets him enough that he has to later admit that she was right.

While wallowing in his misery on a hillside at night, Jay catches sight of a shooting star, and begins to make a wish on it. However, he soon realizes that it is not a star at all. The brilliant light crashes down next to him, and Jay is surprised to see a golden man cradled in the crater. It is Mercury, who, in dying passes on his final message: a great evil is coming, and if earth is to survive, it will need new heroes.

Retrieved from "https://heykidscomics.fandom.com/wiki/Earth_2_Vol_1_1?oldid=1431110"
Community content is available under CC-BY-SA unless otherwise noted.