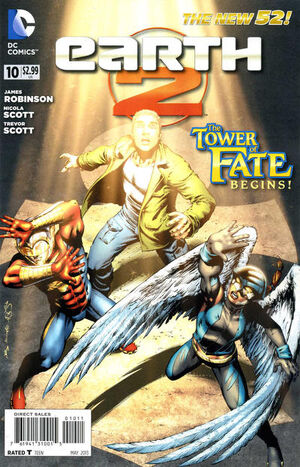 Appearing in "The Tower of Fate, Part One"Edit

Synopsis for "The Tower of Fate, Part One"Edit

Two years ago, Kendra Saunders and Khalid Ben-Hassin had been treasure hunting in an Egyptian tomb when they were attacked. An hour later, Kendra had been transformed, with wings permanently fused to her body. Khalid, meanwhile, had been called to by the Helmet of Nabu.

Now, within the Realm of Nabu, Wotan explains that magic is real - an opposing force to the logic and order of the universe. Long ago, he explains, there lived an Egyptian mage called Nabu, who is considered the greatest of all mages. He used magic, wielding chaos to bring order from it. When Nabu died, though, the power was lost. That was until it was found by Khalid, and banished to the repressed parts of his psyche. It is Wotan's intention to claim that power for his own.

Concerned for his mother's safety, as she was brought there along with he and Khalid, Jay Garrick pleads with Wotan to let her go home. Their host refuses, and so Jay lunges at him, for his mother's sake. Wotan, though, is a powerful magician, and undermines Jay's super-speed with ease. Threateningly, he returns their attention to the tower behind him, and to Khalid. At Wotan's urging, Khalid explains how when he put the Helmet of Nabu on, he felt the magician's power over taking his body and mind, to the point that he began to lose his sense of identity. Every time he removed the helmet, he would be overcome by a temporary insanity. In order to protect himself from further assaults, he used the magic the helmet gave him to banish it to a place where it could do no harm - the Tower.

Wotan admits that he cannot enter the tower, and nor can Mrs. Garrick. The Flash, however, has powers derived from magic, and so he can accompany Khalid into the tower - and he will, or harm will come to his mother. Within moments, Jay and Khalid are in the tower, and the sight takes Jay's breath away. Khalid, on the other hand, feels oppressed by Nabu's strong presence throughout.

Meanwhile, Alan Scott takes the time to visit his lover Sam's grave with his would-be father-in-law. Though Mr. Zhao didn't approve of Alan's relationship with his son, he would still rather have a gay son who is alive than a gay son who is dead. When Alan admits that he blames himself for Sam's death, Mr. Zhao reveals that he has heard rumours that it was Sam that was targeted.

After fighting his way through the Chinese gangs, searching for answers and finding none, Alan seeks out Hawkgirl in Louisiana and admits that he needs her help.

In the tower, Jay wonders if Khalid can sense the helmet's location using the mental link that they are connected by. Unfortunately, before they can even begin to think about that, they are set upon by the great beast of the tower.