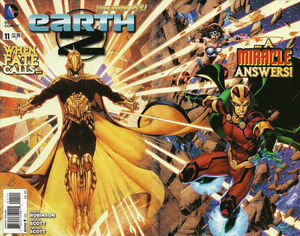 If this role is mine alone and despite whatever sacrifices I must accept, if I can help better this broken world...then let it be my fate!

Appearing in "The Tower of Fate, Part 2: The Man Who Was Brave"Edit

Synopsis for "The Tower of Fate, Part 2: The Man Who Was Brave"Edit

Centuries ago in Egypt, Nabu had been attacked by Wotan who was seeking his power. In his own defence, Nabu brought the mighty Sphynx to life, and defeated her.

Lifetimes later, Wotan now inhabits a new body, and he entertains himself by conversing with Jay Garrick's mother about his folly in attacking Nabu back then. Before that battle, he - then a woman - had decided to become immortal, but her magic was too rudimentary at that point, and she had only managed to come up with an eternal memory. As such, through several lifetimes, Wotan's memories have remained, through lifetimes of bodies, sexes, and races. In that time, he has since become a more powerful sorcerer, but he never forgot how Nabu had marked him then. Nabu cursed Wotan with green skin - before killing her. So, his vendetta is personal, and if Jay and Khalid do not return with the Helmet of Fate, he will kill Ms. Garrick.

Jay and Khalid, meanwhile, are under attack by the beast of the Tower of Fate, who is in pursuit of them, despite Jay's super-speed. Though they manage to lose the guardian for a while, Jay is sure it will be back, and determines to distract it while Khalid finds the helmet. Khalid is surprised by Jay's bravery, but Jay responds that he is merely acting out of a sense of duty to the dying god who gave him his powers - and of course, his kidnapped mother. Even so, Khalid resolves to be just as brave.

As Khalid strikes out on his own, he begins to hear Nabu's voice in his head. Relieved, somewhat, Khalid asks for guidance to the helm, and begs the spirit to help Jay - but Nabu responds that he is dead, so he can't be of much help.

Jay manages to spot the great beast of the tower and hesitates, wondering how to approach it. The decision is made for him when the beast spots him first, and before he can react, it has him in its fist.

Meanwhile, in Dherain, Steppenwolf has received word that a lost son of Apokolips has been found on this earth. He sends his Fury to find the lost son of Highfather in the ruins of Gotham City.

In the Tower, Khalid is tormented by Nabu, who explains that in order to find him, he will have to want to find him. Despite Khalid's reticence to allow Nabu control over his body, he still seeks the helmet. Nabu suggests that this is because he seeks the answer to the mystery of what happened to his former guardian - Kent Nelson. Khalid finds his way to a corridor, where the Helmet of Fate lies waiting. Nabu explains that the madness he feels while wearing it is a divine madness, of a kind he should be honoured to experience. When he puts on the helmet, Khalid will become Doctor Fate - a reference to the fact that Khalid is a doctor of Archaeology.

Before allowing him to put on the helmet, Nabu wonders why Khalid has changed his mind about it. Exasperatedly, Khalid explains that he is doing it for Jay Garrick. Jay's bravery is an inspiration to him, and he once predicted that Jay was destined for great acts - perhaps one of them was inspiring him. He has been inspired to make the world a better place, and if that means succumbing to the madness, he will do it.

Jay, meanwhile, has grown exhausted from his ongoing battle with the guardian beast, but he is saved, finally, by magical constructs created by Khalid. Khalid thanks him for showing him what he needed to see, and introduces himself at last as Doctor Fate.

Retrieved from "https://heykidscomics.fandom.com/wiki/Earth_2_Vol_1_11?oldid=1431120"
Community content is available under CC-BY-SA unless otherwise noted.