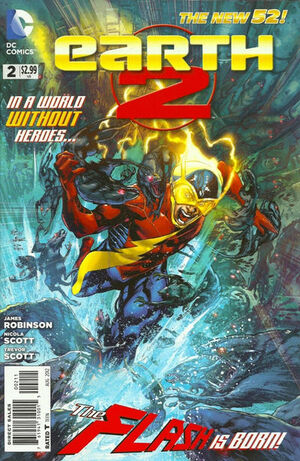 You claim to lack a future? Let me give you one. My spirit wanes. So too would my powers fade to naught if I let them... But while I yet live I can pass them on to another. My final act, my final gift... The Speed of a God!

Appearing in "Age of Wonders"Edit

Synopsis for "Age of Wonders"Edit

Mister Terrific emerges from a wormhole that he had entered in his T-Sanctuary. When he realizes that he is on Earth, he wonders if the portal even worked. That is, until he notices that this Earth is quite different from the one he left. Compounding the confusion, a man greets him by name. He introduces himself as Terry Sloan, the self-proclaimed smartest man on Earth. However, Sloane's intentions are apparently malicious, as he explains that Michael Holt's otherworldly knowledge is a threat to his goals. He anticipates Michael's defensive use of T-Spheres, and counters by releasing a nanite virus that turns the T-Spheres on their owner.

In Lansing, Michigan, Jay Garrick stands over the crater caused by what he thought was a shooting star. Instead, he has found a brilliant glowing man, who resembles the Greek god Mercury. The man explains that he is exactly what he looks like. He is a god, and the last of them. The others were all defeated by Steppenwolf's army. He, meanwhile, has been a prisoner to a great dark force - even greater than Apokolips - for the last ten years. His escape has come at a great cost, and now he is dying. But the darkness that imprisoned him will soon return as a great threat to the Earth and its people, and as such, it will need living heroes instead of dying gods.

Jay is sure that Earth doesn't have any heroes left; that the age of wonders is over. Mercury says he can see the good and evil in man, and he sees a hero before him. Jay argues that he's nobody, and that he has no future, but Mercury believes in him. If Jay Garrick has no future, he will be given one. With a bolt of lightning from his fingertip, Mercury passes on his power of speed to Jay, along with a protective costume. He tells Jay to use his power well, to honor him, and to save the world. A World Army helicopter arrives, ordering Jay to stay where he is and put his hands on his head. The police arrive to investigate the crash site, but Mercury warns Jay to distrust everyone until he is sure of them, as the evil he spoke of can wear any face, or use any guise. Jay asks what he should do, and Mercury answers simply, "Run!"

Alan Scott's jet arrives in Hong Kong, and he is greeted by his driver, Bernard. Bernard asks about the recent deal in Beijing, and Alan replies that, though he was there longer than he wanted to be, G.B.C. now owns its own a satellite. Alan is surprised to find that his boyfriend Samuel has come to meet him at the landing strip, and they reunite with a kiss. Rather than go back to their penthouse, Samuel has planned a romantic getaway at a hotel in the country, knowing that Alan would never escape his work, if he stayed in Hong Kong.

Jay, having outrun the helicopter, decides to test his powers. He realizes he can switch between his costume and his street clothes at will. Speeding around, he nearly runs into a wall, but then discovers that he can run up walls. He leaps across rooftops with ease, noting that everything seems as if it is moving in slow-motion. Suddenly, though, he hears a cry for help from a nearby alley. A young couple are being attacked by Apokorats; small but fierce red-eyed creatures. He promises to get them out of their predicament in a flash. Using his new-found speed, Jay captures all of the rats in a trash can before they can hurt their victims anymore. After accepting the couple's thanks, Jay tells them to get to a hospital, and then speeds off. As he runs away, the couple struggles for a name to call him, and they settle on the Flash.

Jay then decides to see just how fast he can run. He runs so fast that his surroundings become a blur - even with his enhanced senses. When he finally comes to a stop - which proves to be quite difficult - he accidentally digs a trench into the land with his feet. He asks a nearby man where he is, but the man runs off, afraid he is a parademon. A voice tells him that he is in Poland. He looks up to find Hawkgirl flying above him, pointing her crossbow at his head. Apparently, she was expecting him.

Alan and Samuel ride the bullet train, hoping to be at their hotel within the hour. Alan, having planned what he intends to say for some time, explains that Sam's business keeps him in China, and as a result, they are often apart. He proposes that they Sam's head office to America so that they can be together more often. Then, pulling a gold ring out of his pocket, he presents a different proposal, asking Sam to marry him. Before Sam can utter a response, the train runs off its rails and crashes.

Retrieved from "https://heykidscomics.fandom.com/wiki/Earth_2_Vol_1_2?oldid=1431111"
Community content is available under CC-BY-SA unless otherwise noted.