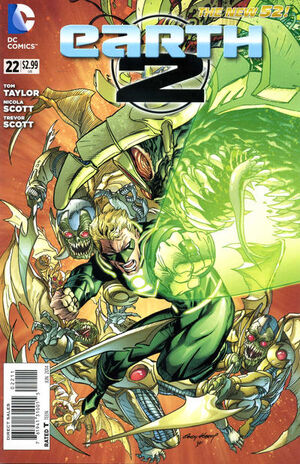 This man is our greatest threat. The Kryptonian is nothing.

Appearing in "The Kryptonian, Part Two"Edit

Synopsis for "The Kryptonian, Part Two"Edit

In the wreckage of Dherain, amidst a pile of bones, a fist with a ring rises from the ground, projecting green energy. It is Alan Scott, who was raised from the dead to continue his role as the Green Lantern. He stands there naked in the wreckage, angry at the alien scourge that he can feel is infecting his world.

In the Batcave, Khalid Ben-Hassin sits on a bed, looking at the cracked Helmet of Fate that he holds in his hands, saying only the word "green". James Olsen wonders what he means by that word, having pieced together other parts of Khalid's ramblings -- "the queen" being Aquawoman, "the angel in the slaughter" being Hawkgirl, and "the alien" being Val. Hawkgirl adds to the interpretation that "the child" is James Olsen, "the murderer" is Batman, and "the resurrected hope" is Lois Lane, who at this moment is looking in on Val, who is trying to shave, only to find that his invulnerability has kicked in, as the razor he is using is now broken. Lois tells Val that she can help him shave using his heat vision, but then she is distracted by the sight of her now-robotic face in the mirror's reflection.

Meanwhile, in Bedlam's science facility, Superman grabs Terry Sloan by the neck and pins him to the wall, threatening to kill him if he doesn't tell him about the Kryptonian he's hiding. Bedlam tells Superman not to hurt him, since he already probed Terry's mind and got the information they needed: the Kryptonian's name is Val-Zod, who was sent to Earth before Krypton was destroyed, but somehow arrived on Earth later than Superman did. Sloan tracked the ship and hid it from the view of monitoring systems as it approached Earth. Bedlam tells Superman that Val was held in Arkham Base, but somebody breached the facility and removed him. As Superman viewed the images of those who had taken Val from the facility, which were captured by the parademons, he sees the image of Batman and says "impossible", knowing that Bruce died in the first Apokolips invasion. Realizing that Batman is a great threat, Superman decides to head to Gotham City to deal with him and the Kryptonian.

Outside the Batcave, high on a cliff, Lois prepares Val for his first attempt to fly. Val notices as he stands on the cliff that his vision and hearing powers have also kicked in, but with that he remembers hearing Batman saying that he intends to use Val as a weapon. Lois says that she understands that the Earth isn't Val's world to fight for yet. Val remembers that his parents were scientists, and while he was in the capsule, being educated by their teachings, he remembers hearing that they believed violence isn't the answer. Lois tells Val that his parents were right, but today he isn't fighting, and so as she takes his hand, the two of them leap off the cliff and take to the sky, with Val feeling the incredible sensation of flying. Lois lets go of Val's hand to see how he would handle flying by himself, and though he finds himself falling into the trees below, he doesn't fall all the way down to the ground, instead stopping in mid-air right at the tree tops.

But then Hawkgirl joins them and both she and Lois see danger coming in the form of a parademon swarm headed straight for them. Lois tells Val to run while she and Hawkgirl do their best to hold the swarm off for as long as they can, although it isn't long before Lois sees who else is among the swarm -- Superman. She is briefly distracted by the sight of him as he flies right by her, which give the parademons time to completely surround her. Superman sees Val and pushes him straight down to the ground, while a parademon takes a bite out of Hawkgirl's left wing, causing her injury. Lois saves Hawkgirl as she falls out of the sky after blasting her way out of the swarm. Superman is ready to beat Val to a pulp when Lois arrives with Hawkgirl and calls out "Clark...it's me, Lois." Superman relents as he turns and says "Lois?" while he sees the android body she now inhabits.

Retrieved from "https://heykidscomics.fandom.com/wiki/Earth_2_Vol_1_22?oldid=1488068"
Community content is available under CC-BY-SA unless otherwise noted.