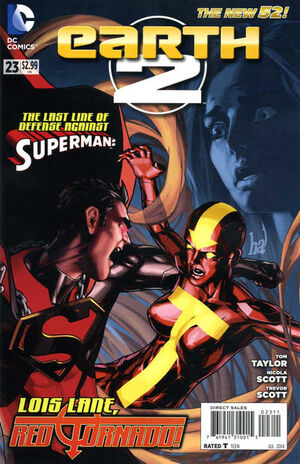 Appearing in "The Kryptonian, Part Three"Edit

Synopsis for "The Kryptonian, Part Three"Edit

Superman stands there looking surprised at the red female android body that calls him by his name "Clark" and says that her name is Lois. She tells him to put Val down now, and so he lets the Kryptonian drop to the ground. He wonders how she is alive again, and she answers that she doesn't know, but suddenly she is attacked with a parademon energy beam, which makes Superman so angry that he lashes at the swarm with his heat vision, incinerating those within close range. Lois tells Superman that he doesn't kill, and Superman tells her that she isn't supposed to see him like that. Val rises up from the ground and tells Superman to get away from her, but Lois interrupts the two from fighting with each other, telling Val and Hawkgirl to get to safety while she goes with Superman to try talking to him.

After Superman and Lois depart, Val and Hawkgirl see the rest of the parademon swarm coming straight for them. Hawkgirl says they're going to have to fight their way through the swarm, but Val says that he won't kill as he dives right on top of Hawkgirl and shields her with his body from the parademon energy blasts. Then suddenly the blasts stop, and as they look up, they see that Green Lantern is alive and using his green energy to fend off the parademons. The three of them return to the Batcave, where Green Lantern sees that Khalid is not himself as he is still recovering from the defeat handed to him by Superman. James Olsen asks where Lois is, and Val says that Superman took her.

At that moment, Superman arrives at the Kent residence in Smallville with Lois, telling her that his parents are going to be surprised to see her. Though both Jonathan and Martha Kent were initially fearful to see Superman and Lois at the front door to greet the visitors, Martha tries to be friendly as possible and invites them in.

Meanwhile, back in the Batcave, Batman tries to think of only one reason that Superman has brought the parademons to Gotham, and if that was really Superman, then he knows the location of the Batcave. Val says that they need to get Lois back, but Batman says they have no idea where she might be with Superman. James, however, does know where Lois is since she allowed him to hack into her systems to use her sensors so that they can spy through her, and shows the Wonders that she and Superman are currently in Smallville with the Kents.

As Martha Kent tries her best to entertain her visitors without being fearful of their presence, Superman is contacted by Bedlam, to whom he reports that he knows where the Wonders are hiding and tells him to release the second wave. Lois picks up what Superman is saying and transmits it to the Wonders in the Batcave, which means that they need to evacuate as soon as possible. James contacts Amar Khan to tell the World Army that they need an emergency evacuation, with Batman saying that they will regroup on Themyscira, but Green Lantern says that he can feel the world's pain and anger and that it wants him to strike, that he's not retreating. Batman tells the Batcave to "initiate Protocol Azrael," which he tells Green Lantern that he doesn't want to be there to find out what it means when it happens.

Suddenly James Olsen reports that they have incoming, and it is soon followed by the emergence of a Warhound that has dug its way into the Batcave, followed by the parademon swarm. Red Arrow protects Doctor Fate from the parademons with his arrows, but as the Wonders do their best to hold off the rest of the swarm, Batman is about to be attacked by the Warhound. Red Arrow responds and protects Batman by firing an arrow into one of the Warhound's eyes, but he is then mortally wounded by one of the Terrors. Sandman arrives to open a portal for the Wonders to escape, but Green Lantern refuses to go with them. As the final seconds of "Protocol Azrael" count down, Green Lantern tells Hawkgirl to stay with him, telling her that he has a plan, right before the Batcave explodes.

Retrieved from "https://heykidscomics.fandom.com/wiki/Earth_2_Vol_1_23?oldid=1489651"
Community content is available under CC-BY-SA unless otherwise noted.