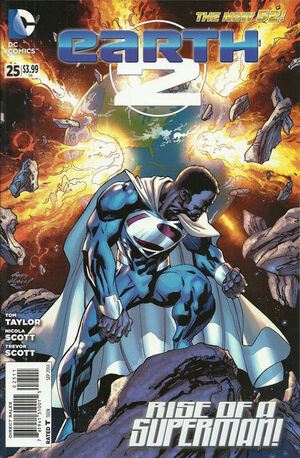 I understand now. I won't kill Kal-El... but I need to fix what he has broken.

Appearing in "The Kryptonian, Part Five"Edit

Synopsis for "The Kryptonian, Part Five"Edit

In the World Army base on Amazonia, a group of leaders are staring at a satellite relay. Hawkgirl and Green Lantern are missing, and their radios have them in the middle of the Indian Ocean.

It turns out that it was part of a reckless plan to break Flash out of captivity. His jailer, Beguiler, is in hot pursuit of the heroes at the head of a Parademon army.

Meanwhile in another part of Amazonia, Val has revealed his spacesuit to Accountable. It bears the crest of the House of El. Val explains that his parents were pacifists who tried to warn the Science Council that Krypton would be destroyed, but were punished. Val was taken in by Jor-El and Lara, who eventually sent four rockets away from Krypton, carrying their infant son Kal, their niece Kara, himself, and one other. Val knows what Superman has done to the sigil, but he wears it to honor the couple who saved his life.

In the middle of the Indian Ocean, Beguiler manages to break Green Lantern's shield, and knocks him into the water. Hawkgirl pulls a crossbow as a stalling tactic, then smirks. She led her pursuers to this location. Suddenly, Aquawoman bursts out of the depths, catches Green Lantern, and destroys the Parademons with a massive burst of water. Beguiler prepares to kill the heroes, but Flash breaks free and catches her in his arms. Her attempts to get free are unsuccessful: thanks to her torture, he now has a far increased pain threshold. However, there is one thing he has never done: he has never run fast while carrying someone, for fear of hurting them. Until today.

Flash proceeds to run fast enough to severely injure Beguiler, until he runs so fast that he finds himself in a field of white. Neither himself nor Beguiler know what this means, but when he lets go of her, she disintegrates. None of his allies, in the Ocean or at Amazonia, know what to make of this, but it seems clear that Beguiler is off the board for at least a while.

In Kansas, Superman has taken time off. His ultimate plan is not yet complete, and the revelation that the Red Tornado android houses the consciousness of Lois Lane has him in a sentimental mood. So he has tracked down his parents in their home and is preparing to have dinner with them. Pa Kent is a little hesitant, but when Superman tries to start a conversation over dinner, claiming the mood is cold, Pa snaps. He is tired of leaving in fear, and he refuses to go along with some fantasy of times past when his son is a mass-murderer and his daughter-in-law is a brain in a robot body. When Pa Kent shows contempt for Superman's claim to respectability as an emissary of Darkseid, Superman kills his father with heat-vision.

This is the final straw for Lois, who refuses to believe that the man in front of her is her husband. Superman shouts that he is, but he receives a psychic message from Bedlam telling him that the plan is complete. Suddenly caught the wreckage of what he was and the terrible purpose he now serves, Superman flies away.

The Apokiliptian plan is horrifically simple: using Fourth World technology, the enslaved genius of Terry Sloan, Michael Holt, and Mister Miracle, and the C.E.R.N. supercollider, they are going to open a Boom Tube big enough to transport the whole Earth to Darkseid personally.

As the sound of the Boom Tube echoes across the entire Earth, Green Lantern leaps into action. Telling Hawkgirl and Commander Khan to strike the base in Switzerland that is the source of the attack, he heads to space to hold the Earth in place. On Amazonia, the deranged Doctor Fate confronts Val with the ominous message that "Worlds End", he places his cracked helmet on the Kryptonian. With a flood of light out of the helmet, Val is shown a glimpse of the universe. Humbled, Val uses his heat vision to fix the helmet and vows to fix everything that Kal-El has broken, starting with the crest of the House of El and the very name of Superman. Telling Accountable to alert Batman, he flies into space to help Green Lantern.

In the upper atmosphere on the far side of Earth from the Boom Tube, Green Lantern is anchoring a net of energy to pull against the vast maw. Superman grabs him by the collar... only to be grabbed in turn by Val...

Retrieved from "https://heykidscomics.fandom.com/wiki/Earth_2_Vol_1_25?oldid=1431134"
Community content is available under CC-BY-SA unless otherwise noted.