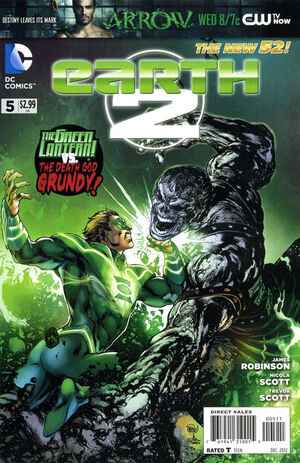 Grundy is a servant to something greater... A power called The Grey. That's what I need to face if we're going to win.

Appearing in "Welcome to The Grey!"Edit

Synopsis for "Welcome to The Grey!"Edit

In Washington, D.C., Commander Wesley Dodds and his Sandmen infiltrate the White House and extract the president from the Oval Office, as the building is quickly overrun by the fungal tendrils of The Grey. Amar Kahn, commander of Sentinel - the World Army's intel branch - is in communication with his superiors at the time, hoping to prevent them from calling for a nuclear strike against the capitol by reminding them of the new "Wonders" who have appeared to fight the new threat. The World Army's own Al Pratt has just landed at the Washington Mall to fight the threat of Grundy and bring the new heroes - Hawkgirl, The Flash and Green Lantern - back for questioning.

Unfortunately, the new heroes have no intention of going with him. After Al knocks Green Lantern miles away with one punch, Jay decides it's time to step up, and save Hawkgirl from this "Atom"'s attack. Though she is grateful, Al is only disabled temporarily. As he rises up again, he is suddenly overcome by tendrils of The Grey, and he realizes too late that he had not actually defeated Grundy. He could not kill what was already dead. As Al is swallowed by the Grey, Jay lives up to the responsibility of the name Wonder, and rushes to his rescue. Fortunately, Green Lantern returns, and promises to take care of Grundy while Flash and Hawkgirl look to Atom.

Unfortunately, because of Atom's failure, the World Army decides that they need to send an outside adviser at Sentinel. Since the Grey interacted with the Atom, the ETA for Earth's inevitable decay is now just 22 hours, and Terry Sloan has been chosen to take the lead, much to Kahn's displeasure.

After Hawkgirl and Flash pull the Atom from the Grey's tendrils, Green Lantern returns to explain that he may know how to stop the Grey. However, as Grundy is dead, he is unstoppable. In order to defeat both, Alan must leave his body and enter the Grey in the same way that he enters The Green. Unfortunately, his human body will be at risk while he is gone, and that leaves the three remaining heroes to protect it from Grundy.

Alan enters the Grey and finds that he can communicate with it telepathically. The Grey explains that it neither can nor will stop Grundy from bringing about a new age by causing the Earth's decay. The Earth, it claims, has lived out its time, despite Alan's argument that humans continue to thrive. The Grey urges Alan to join with it, providing the tantalizing reward of returning his lost lover Sam.

Back at Sentinel, Terry Sloane reveals that despite Kahn's warnings, the World Army has already launched three nuclear missiles to strike Washington. Meanwhile, the remaining heroes struggle to protect Alan's body, while Alan himself is succumbing to the temptations of the Grey.

Retrieved from "https://heykidscomics.fandom.com/wiki/Earth_2_Vol_1_5?oldid=1431114"
Community content is available under CC-BY-SA unless otherwise noted.