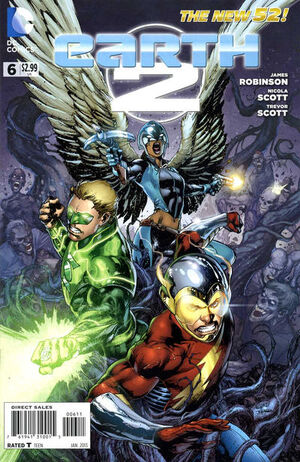 Captain Pratt survived one atomic blast, let's see if he can go for two. As for those others... they're on their own.

Commander Amar Kahn is outraged that Terry Sloan has been given the authority to launch nuclear warheads at the US Capital, which he has done. As there is no chance of stopping them, he begs that Al Pratt be warned of the coming strike, along with the other new Wonders who are there. Coldly, Sloan reminds that doing so would risk leaking their intentions to Solomon Grundy. The Wonders will have to take care of themselves.

Since Green Lantern entered The Grey to talk it out of its attack, his body is vulnerable to Grundy's attacks, and the other heroes have been tasked with defending his body from harm. Unfortunately, he has been distracted by the Grey's promise of returning his dead fiancé Sam to him. It takes a great amount of willpower to pull himself away and be freed of the illusion. Alan realizes suddenly what he has to do.

He returns to his body and grabs Grundy up in his arms, carrying him outside of the Earth's atmosphere. He explains that since he created Grundy, indirectly, he can't stop him. However, he can put the brakes on him by separating him from his source of power. Unfortunately, he soon spots the nuclear missiles heading for Washington and is forced to pause and catch them in mid-air, before throwing them out into space. Though the act drains his ring's power - a danger, given how far from his source of power he now is - he still has enough energy to send Grundy to the moon, and maroon him there. With his ring drained, though, he begins to fall back toward the earth, wondering if his power will return as he gets closer, or if he will simply die.

Fortunately, he is caught by Hawkgirl, who has just escaped with the Flash after Al Pratt returned to his secondary mission: subduing the new Wonders.

From the war-room of the World Army, Amir Kahn smugly points out that Sloan's plan was not required. The Wonders saved the day.

Regrouping in safety, Green Lantern explains to his companions of how he negated both Grundy and The Grey by separating the two. The Grey had committed entirely to Grundy's path of destruction, to the point that if he was prevented from completing it, it would be unable to do anything else.

In the meantime, the Earth has been rendered desolate by The Grey, but Green Lantern's ring has finally recharged, and now it's time to set things right. With the power of The Green, he sends his green flame through the planet, as a form of booster shot against the Grey.

Eagerly, Flash suggests that they join forces as New Wonders, but Green Lantern refuses, claiming that he doesn't need their help to face the threat worse than Apokolips. Despite their help earlier, he believes there is nothing that can stop him. Hawkgirl considers him ungrateful, and Flash is left wondering what they will do now.

Retrieved from "https://heykidscomics.fandom.com/wiki/Earth_2_Vol_1_6?oldid=1431115"
Community content is available under CC-BY-SA unless otherwise noted.