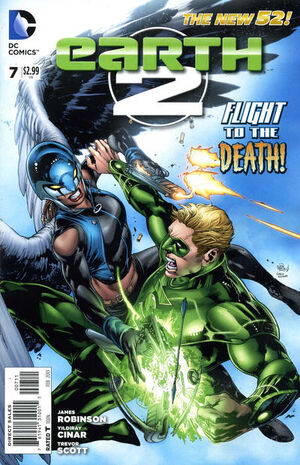 First, Sloan, you may be my equal in the Council's eyes, but God help you if the world ever learns of your existence. And that's where I have you at my mercy. As to whether I'm a fool... Perhaps. A wise man would probably just kill you where you stand.

Across the world, news of the new Wonders and their battle in Washington, D.C. breaks. Their success is felt everywhere, as the flora returns in the wake of Solomon Grundy and The Grey's defeats. In other news, Alan Scott has been reported alive and well, with the story airing that he was delayed, missing the train that would have killed him. Of course, the truth is another story, and while he is alive, Alan Scott is anything but well.

With the loss of his fiancé Sam, Alan has been overcome with grief, and trashed his Manhattan penthouse. When he finally takes a moment to step out onto his balcony, he is surprised to find Hawkgirl waiting for him. Not merely because he expected to be hard to find, but also because she must have deduced his identity to find him. She explains that she put it together when the train he was supposed to be on crashed, and that happened to be the first reported sighting of the Green Lantern.

To even the score, she removes her helmet and introduces herself as Kendra Munoz-Saunders - a treasure hunter. When she took a job with the World Army, she ended up with a permanent pair of wings - which despite the power they afford her are an inconvenience in terms of having a normal life; not to mention the World Army's constant pursuit ever since. Despite her urging, Alan refuses to join she and Flash on a team of Wonders against threats. She warns that his ring failed him once, and could again. Without it, he is merely a man. To demonstrate this, she fires a bolt from her crossbow that manages to catch the ring on its shaft, and pierce the photo of Sam it was seated next to. The act fills Alan with such rage that he calls the ring to him and turns on her. She has already gone, though.

Meanwhile, at the World Army headquarters in Tokyo, the council insists that Terry Sloan stay on, despite Amar Kahn's complaints about the unethical and rash decisions Sloan makes - for example, firing nuclear warheads at the U.S. Capital. Afterward, Kahn makes no effort to conceal the fact that he thinks Sloan's appointment to leader of the World Army Science Directive is a mistake. He regards Sloan as a genocidal sociopath, and will certainly monitor his activities heavily - the only reason he stayed on rather than resigning.

In the meantime, Kahn has sent his Sandmen led by Wesley Dodds to Paris, where he believes Sloan has had a base in plain sight. Somehow, Kahn is already aware what they will find there: not Terry, but Michael Holt. As expected, Holt is there, but he attacks the Sandmen on sight. Dodds tries to reason with him, but he claims to be in service to Sloan, so Dodds knocks him unconscious.

Back in Tokyo, Sloan lays claim to one of Kahn's projects: the Red Tornado. While Kahn's scientists could never get the android to work, and Sloan believes he can. Despite his inner outrage, Kahn remains calm, which troubles Sloan visibly. Terry turns to him and wonders at how he could completely out-maneuvre him, take his glory and credibility, all despite being a wanted man, and yet Kahn is not intimidated. Kahn reminds that the fact that Terry even exists is enough leverage for him, as the people would certainly riot if they knew.

According to Kahn's will, Dodds and his men destroyed Sloan's base in Paris, stealing the technology therein. Perhaps, with the help of Mister Terrific - who has yet to be deprogrammed - they may be able to understand that science. In the meantime, they left a corpse behind, in Michael's place, hoping Sloan would not be able to tell the difference. Kahn warns that siding against Sloan with him is tantamount to treason against the World Army, but Dodds assures him that they make the world a better place by doing so.

Retrieved from "https://heykidscomics.fandom.com/wiki/Earth_2_Vol_1_7?oldid=1431116"
Community content is available under CC-BY-SA unless otherwise noted.