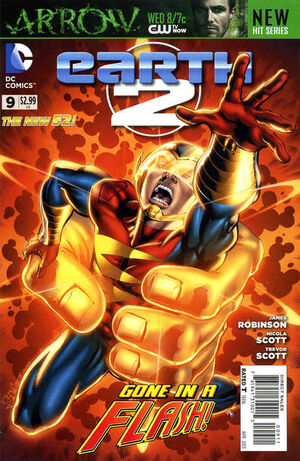 The wonders appeared. They triumphed. Then just as quickly, it seemed they went away.

Appearing in "The Tower of Fate: Prologue: The Man Who Was Scared"Edit

Synopsis for "The Tower of Fate: Prologue: The Man Who Was Scared"Edit

In New Orleans, Kendra Saunders attempts to convince Khalid Ben-Hassin to use the Helmet of Nabu to aid her and the world against a coming threat which he himself foretold. Unfortunately, he is terrified to wear it. Every time he uses it - like he used it to point her in the direction of The Flash - he feels it eating away at his sanity.

Sighing, Kendra admits that she will not force Khalid to do anything, but warns that there is so much at stake, and she, at least, is committed to protecting it. Jay, meanwhile is in Michigan. She asks that Khalid at least teleport there to keep an eye on him. Reluctantly, he agrees.

In Lansing, Jay eagerly makes his way home, hoping to let his mother know at last, that he is alright. All the while, he is followed by Khalid, who, driven temporarily insane by the act of teleporting, begins shouting out prophecies warning of a darker horror coming, despite the arrival of flying men of light and lightning.

Upon returning home, Jay's mother hugs him tightly with concern and relief, though he was only gone a short time. She explains that she had heard from a man named Dodds that her son was the Flash; the one who had helped in Washington, D.C. Dodds and his men had been there just two hours ago, which, Jay realizes, means that they are probably still in the area, watching.

His worries are confirmed when the roof crashes down on them, as The Atom's hand breaks through to grab for him. This is followed by the appearance of Sonia Sato of the World Army. She orders Jay to stand down, but instead, he changes into his uniform and begins attacking the soldiers. Unfortunately, the Atom is still a threat.

From nearby, Khalid watches, and hears the voice of Nabu in his head, commanding him to call on the Helmet of Fate. Still, Khalid resists, while out of the corner of his eye, he spots Dodds watching. Unexpectedly, though, Dodds disappears in a cloud of dust before his eyes and appears in the house, holding Jay's mother hostage. Again, Nabu urges Khalid to use his power to aid Jay. Khalid, has other plans, though, insisting that he doesn't need Nabu's help to do the right thing. Unseen by the others, he grabs a stick and clubs Dodds over the head, providing Jay with the distraction he needs to grab both Khalid and his mother, and carry them away. Though the Atom gives chase, Khalid teleports them away, leaving Dodds and Sato confounded.

The three escapees find themselves in a strange landscape, which, though he has never been there, is familiar to Khalid. He explains that he is a colleague of Hawkgirl's, and that they are in the realm of Nabu, one of the greatest mages of Egypt. A stranger appears, disputing the suggestion that Nabu is greatest, and introducing himself as Wotan. He states that he is a mage in an organization that seeks to augment its control of magic by obtaining Nabu's power. That power has been confined to a nearby tower - which only Khalid can enter.

Retrieved from "https://heykidscomics.fandom.com/wiki/Earth_2_Vol_1_9?oldid=1431118"
Community content is available under CC-BY-SA unless otherwise noted.