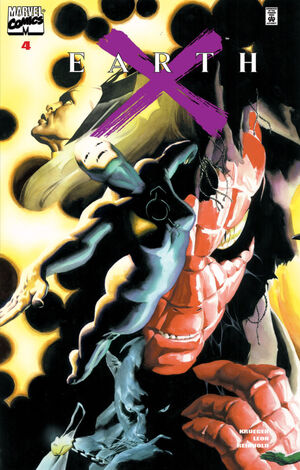 ...when everyone is dead, what will I watch then?

X-51 and Uatu review Wakanda's history and talk about Vibranium and how it caused the mutation of all the people on Earth.

Reed is speaking with T'Challa about stopping the mining of Vibranium, and T'Challa refuses. The wildlife of Wakanda has been transformed to be partially human and able to speak, and T'Challa believes they are the animal spirits, guiding him to make the right decisions.

Karnak tells Reed that his theory about the mutations is too perfect, and reality is never without flaws. Reed remembers Xavier's Cerebro, and proposes using it to find the rest of the Inhumans on the planet.

Cap confronts The Skull and his forces, only to be scoffed at and beaten as the Skull takes control over all the people around Cap, forcing him to fight people that do not want to fight him. The Skull also tells about the origin of Iron Maiden, and Spiders-Man weaves an illusion on Cap, showing him that he is attacking Bucky back in World War II instead of attacking The Skull.

The Hydra attack another citizen on the streets of New York City, and are vanquished by Bruce Banner and The Hulk, who have separated into two beings, a giant green ape-like monster who is mute and a boy with glasses. Bruce mistakes the citizen for Betty, and she is more afraid of the boy than the monster. They continue on to the Sanctum Sanctorum, meeting Clea, the now Sorceress Supreme.

Retrieved from "https://heykidscomics.fandom.com/wiki/Earth_X_Vol_1_4?oldid=1499177"
Community content is available under CC-BY-SA unless otherwise noted.