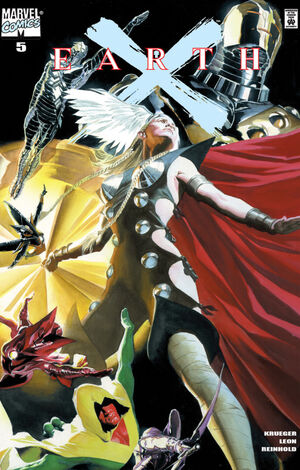 Scott...something really bad is coming to Earth. Nothing is going to survive this. Jean would want you to live.

Uatu and X-51 review the past of the Asgardians, discovering them to be alien shape shifters whose forms were dictated by the people of Earth when they first arrived.

At Castle von Doom, Medusa gives Richards Lockjaw's Antennae so that he can go use Cerebro to find the rest of the Inhumans on the planet. As soon as he leaves Doombots see the Inhuman troupe as intruders and attack.

Cap is feeling defeated by the Skull and his forces, and is about to give up when Daredevil and his circus people convince him to continue. He sends the crew to find Scott Summers, and he and Daredevil continue to follow the Skull's forces.

Bruce Banner and Hulk talk to Clea about Bruce's dream about Mar-Vell, and find out that Stephen Strange's astral form has been disconnected from his body for years. Bruce has a proposition for Clea, but wants to wait until Thor arrives.

Thor is fighting Storm Giants alongside the Iron Avengers and Vision in downtown New York. Thor turns out to have been further humbled by Odin and turned into a woman. As the Storm Giants are defeated, the Iron Avengers are called away and Loki shows up taking responsibility for the giants. Thor learns that she cannot return to Asgard without being cursed to never return to Midgard again.

Corsair, Havok, and Polaris appear to Scott Summers as holograms, explaining that Earth is doomed and the Starjammers will only allow them to pick only him up and save his life. Scott explains that no matter what has happened or will happen, Jean is on Earth and he will stay close to her.

Wolverine and Jean are overweight, married, and living in an apartment, seemingly living out the American dream.

The Inhumans defeat the Doombots at the castle and find Reed's inventory of Doom's old equipment. A note is attached to the time platform, with Reed questioning going back and preventing everything that has happened, including Sue's death and the mutation of the planet.

Retrieved from "https://heykidscomics.fandom.com/wiki/Earth_X_Vol_1_5?oldid=1622361"
Community content is available under CC-BY-SA unless otherwise noted.