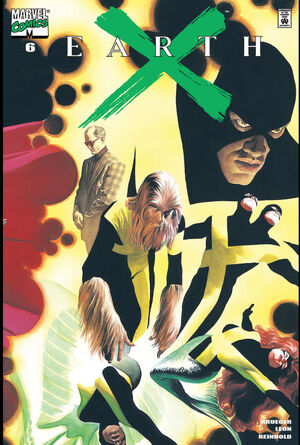 There is no devil, X-51. Surely I have convinced you of this.

Uatu and X-51 review the history of Magneto, Professor X and the X-Men. Richards uses Lockjaw's wishbone and travels to Xavier's school, which is in shambles since there is no longer a need for X-Men now that the entire world is full of mutants. There, he uses Cerebro to find the rest of the actual Inhumans left on the planet.

In Central Park, the New X-Men attack Scott Summers in an attempt to show him they already know how to fight. He easily defeats them and at the request of his friend, Captain America, begins their training as the official new X-Men.

In Soho, Banner, Hulk, and Thor ask Clea, the current Sorceress Supreme to take them into Death's Realm to find Mar-Vell. Since once you enter Death's Realm, you lose your soul, the only one who can enter safely is the Hulk, because his soul lies in the body of Bruce Banner. Unfortunately Hulk is mute, and must carry a handwritten letter to Mar-Vell instead of speaking with him.

The Iron Avengers return to their lair and are getting sanitized, eerily speaking as though they are the people they were designed after, calling each other Hank and Jan. Tony Stark is in his operations room speaking with President Osborn. Vision protests working with Osborn, claiming that he is a monster and that his riches were made on the blood of innocents. Tony insists on giving him a second chance, saying that his freedom from legislation allows him to create more inventions to help people than he could without Osborn as a friend.

While training the New X-Men, Scott takes the name, "Mr. S", as an homage to Professor X.

Peter Parker confronts his daughter May, lecturing her once again about Power and Responsibility. She tells him she would have never let that burglar go in the first place, and will not allow her dad to be her own 'Uncle Ben'.

The Skull's forces march on, as Cap and Daredevil follow them to see what their plans are. Daredevil reveals that the only reason he's fighting alongside Cap is that he knows they'll lose.

Retrieved from "https://heykidscomics.fandom.com/wiki/Earth_X_Vol_1_6?oldid=1426163"
Community content is available under CC-BY-SA unless otherwise noted.