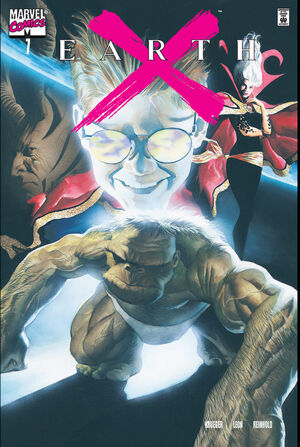 Ben, it's war. The Skull's coming. He has an army in the tens of thousands. We have to prepare.

X-51 and Uatu review the backstory for the Hulk, revealing that Betty Ross died of radiation exposure emitted from Banner's enemies. It is also revealed that the Hulk continues to absorb gamma radiation, and has since the day of the bomb, continuously mutating him, and causing the variations of the Hulk over the years. The celestial seed implanted in him that was germinated by the gamma radiation was seeking to do what no other seed had ever done, gain independence from its host and an identity and form of its own.

On the Moon, John Jameson sees something that scares him. He says that it's bigger than anything he's ever seen and has stars inside it. He heads out of his home where he and his wife, Kristine live, for two reasons. One, to warn Earth, and two, because it's the time of day that he turns into Man Wolf, so he can't be around his wife.

Reed is in New New York, on his way to visit Ben for his old computer files about Xavier's Brain. He argues with himself, seemingly arguing with Susan. Medusa calls and explains that Reed left the Doombots on by accident, but is interrupted by Luna leaving the room and hiding her self. At The Grimm's house, Reed meets Buzz and Chuck for the first time, and chats with Alicia for a minute before retrieving his files. After examining them for a few minutes, he's able to stretch his brain in such a way to allow him to use Cerebro, which he brought with him. He states that his plan is to find the rest of the Inhumans on Earth for Medusa.

At the Sanctum Sanctorum, Clea, the Sorceress Supreme, is sending Hulk into Death's Realm to look for Captain Marvel. Banner and Thor look on.

In the realm, Hulk passes many dead friends, including the Avengers and X-Men, as well as the remaining Fantastic Four. They all believe they are alive and the people not there are the dead ones, and it turns out that the Hydra are killing their inhabitants, not just controlling them, since She Hulk is there as well. In the Sanctum Sanctorum in the Realm, Hulk meets Doctor Strange, whose astral form has been slain while his body still lives. He says that Mar-Vel will come to them when the time is right, and that Hulk must hurry back to Banner to save his life.

Thor gets worried as Banner is distressed, learning that Clea killed Strange's astral form, and Thor heads into death's realm to retrieve the Hulk. Clea reveals herself to be a villain, having slain Stephen and now being a lover of Loki.

At the New Jersey side of the Tunnel into Manhattan, The Skull's followers gather, readying themselves for an attack on New New York.

Cap, Daredevil and the X-Men arrive at The Grimm's apartment to bring him news of the coming war, and to enlist their help.

His dreams have worn him out, exhausted him so that he sometimes cannot tell whether he is awake or asleep.

Retrieved from "https://heykidscomics.fandom.com/wiki/Earth_X_Vol_1_7?oldid=1426164"
Community content is available under CC-BY-SA unless otherwise noted.