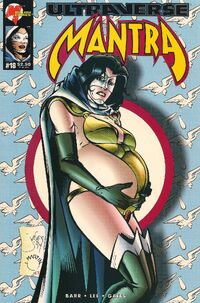 A normal woman living a normal life until the spirit of Lukasz came to inhabit her body following a battle between the forces of Boneyard and Archimage.[1] Her soul shunted aside by Lukasz, she eventually managed to regain some control of her body, and eventually the two were separated, during which point she experienced a mystically-accelerated gestation and birthing process that resulted in the birth of Lukasz' former friend and now-enemy, Thanasi, who became Necromantra. In the battle that followed, Eden sacrificed herself to save Lukasz, with Lukasz returning to her body.