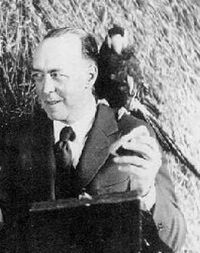 Edgar Rice Burroughs was an American pulp story writer born in Chicago, Illinois on September 1st, 1875. His stories often combined elements of fantasy, science-fiction and high adventure. Over the course of his lifetime, Burroughs published over seventy novels. He passed away in his home in Encino, California from heart complications on March 19th, 1950.

Although Burroughs is most widely recognized as the creator of famed jungle hero Tarzan, his first professional work was actually a short story titled Under the Moons of Mars published in 1910. This story featured the character of John Carter, a Civil War hero who is mysteriously transported to the planet Mars (or Barsoom as the natives call it) where he befriends a Barsoomian soldier and falls in love with a Martian princess. Colloquially known as the "Barsoom Series", eleven novels featuring John Carter were published between 1912 and 1948. A similar, though less popular formula was used for the Carson of Venus series which included four novels featuring the titular hero Carson Napier.

Another of Burroughs' unique environments involved the fictitious Inner-Earth world known as Pellucidar. The Pellucidar series featured adventurer David Innes and first appeared in the 1914 novel At the Earth's Core. Six Pellucidar novels were written between 1914 and 1944.

Burroughs' most popular work however was the character of Tarzan. Tarzan was actually John Clayton, the son of a British nobleman whose family was marooned on the coast of equatorial Africa. Raised by apes, John Clayton became more famously known under his jungle name - Tarzan. Edgar Rice Burroughs authored more than twenty-four novels featuring the jungle lord, one of which included the 1914 novel The Son of Tarzan, which introduced the character of Jack Clayton, better known as Korak.

Early comic book adaptations of Burroughs' work were published by Gold Key Comics, an imprint of Western Publishing. In the early 1970s, Gold Key discontinued publication of their comic book lines and DC Comics acquired the licenses for Tarzan, Korak, John Carter, Carson of Venus and the Pellucidar stories. When DC discontinued the various ERB titles, the characters lapsed once again into the public domain.

Marvel Comics began producing comic books based on Burroughs' work in the late 1970s. The first was Tarzan which began publication in 1977. The series ran for twenty-nine issues and was canceled in October of 1979. Three annuals were published, released one per year from 1977 to 1979. The Marvel Comics title, predominantly written by Roy Thomas with artwork by John Buscema, had very few original stories and largely adapted tales first published in the various Tarzan novels.

The second title published by Marvel based on Burroughs' properties was John Carter, Warlord of Mars, which began publication with a June 1977 cover date (released in tandem with Tarzan). This series ran for twenty-eight issues and also produced three Annuals. The final issue was published with an October, 1979 cover date.

Retrieved from "https://heykidscomics.fandom.com/wiki/Edgar_Rice_Burroughs?oldid=149872"
Community content is available under CC-BY-SA unless otherwise noted.