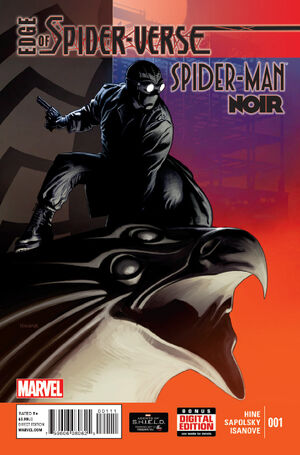 In 1939, a couple watches a newsreel film about the exploits of The Spider-Man. The man, later revealed to be "The Magnificent Mysterio" talks to his assistant about his intentions to obtain The Spider-Man's blood, knowing that he's becoming stale from his acts, even more so after listening to a father and son choosing a show of monkeys over his act.

Meanwhile, Peter, his aunt May and Mary Jane Watson visit the New York World's Fair, discussing whether to see Salvador Dali's display or assist in Mysterio's act, choosing the latter while he reflects on the distance between him and Mary Jane. During the show, Peter's Spider Sense spikes up, but he dismisses it in order to enjoy the show. After the act, the three of them discuss how Mysterio managed to perform his escape, while Mysterio and his assistant argue about how they're wasting their time with the act. Mysterio says that once he gets The Spider-Man's blood, he will become the new Kingpin of Crime, only to be interrupted by his associate, Wilson Fisk, the actual Kingpin of Crime himself who announces him that he got someone who he can talk to.

They both arrive to a secret hideout where the Kingpin holds The Ox captive. Mysterio asks him about the Spider-Totem that he assures endowed The Spider-Man with his powers but he reveals that all of the spiders in there have died. Then he asks him about The Spider-Man's former lover Felicia Hardy. Once Mysterio and the Kingpin arrive, they question her about his whereabouts. Kingpin shoots her butler in order to intimidate her, but she shocks them once she reveals her disfigured face, however, Mysterio decides that The Spider-Man will come to them now that they got Felicia on their hands.

Afterwards, Mysterio announces a challenge to The Spider-Man requesting a Blood Sacrifice in order to save Felicia, and if he doesn't show up, she will be the one who will be sacrificed, prompting Peter to retake the mantle of The Spider-Man. Once the day arrives, Peter shows up, not willing to take his chances against Mysterio should he dare to kill Felicia in public. Mysterio sets up the trap against him, knocking him down with a sleeper gas in order to contain him. Once he's put in a special chamber, Mysterio's assistant extracts a sample of his blood in a vial, then Mysterio announces a "challenge" to accomplish his feat of escaping the water filled chamber, a plan to kill him while blaming faulty equipment.

Peter manages to improvise an oxygen mask with his webbing, giving him enough time to regain his strength and break the chamber. He frees Felicia while he taunts Mysterio by announcing that due to the lack of a sacrifice, Mysterio will be paying refunds to all the assistants. They both fight until they're suddenly interrupted by a flash of light bringing Karn, the mysterious totemic predator who proclaims that The Spider-Man is a weak spider worth the killing. Peter fights him off but then the Superior Spider-Man arrives in time, intercepting the battle in order to retrieve The Spider-Man, escaping back through his portal. Karn also escapes, vowing to find and kill all the spiders, while Felicia takes advantage of the confusion in order to steal the vial with Peter's blood.

Afterwards, both Spider-Men arrive in the year 2099 where the Superior Spider-Man brings The Spider-Man up to date with his whereabouts and the hunt of all the spiders across the multiverse, bringing him to his gathering of spider powered beings.

• The Peter Parker of the 1930’s finds himself not only up against Mysterio, but knee-deep in the Spider-Man event of 2014!

Retrieved from "https://heykidscomics.fandom.com/wiki/Edge_of_Spider-Verse_Vol_1_1?oldid=1505815"
Community content is available under CC-BY-SA unless otherwise noted.