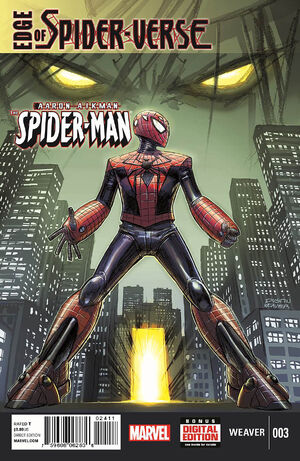 You can't be their hero, little Spider-Man. Mankind is doomed.

Appearing in "Aaron Aikman: The Spider-Man"Edit

Synopsis for "Aaron Aikman: The Spider-Man"Edit

Aaron Aikman is one of the most prominent scientists at the Ikegami Medical Center and Research Institute. At the young age of 27 he has developed major contributions to the field of biology and chemistry, mostly derived from his experiments on insect venom. He applied one of his experiments, based on the Spider DNA, on himself as a test subject, gaining arachind powers and becoming a hero to his city. After his first battle against a creature named Redeye, he became The Spider-Man, defending his city defeating all of his opponents until he met Naamurah who almost defeated him in their first encounter, warning him thet "His World will Fall" as more like her will come and he will become their food.

While he works on upgrading his armor and web fluid to face-off against Naamurah again, he receives the visit of Dr. Kaori Ikegami, founder of the Institute he works and his first serious relationship, which came to be since Kaori's daughter Hannah suffered an accident that left her with irreversible brain damage. THey both worked on developing a cure until Kaoir left to another facility, never seeing each other again until now. Kaori asks for Aaron's help which he rebuffs with the excuse of travelling to another meeting. She confronts him that he thinks she's stupid and doesn't care anymore about her daughter, making her flee in tears from the place. Aaron tries to catch her but decides to let her go and focus on his fight against Naamurah.

As Spider-Man patrols, his sensors detect the presence of Naamurah, but after saving its intended victim and clashing on the streets, he discovers that is someone similar to Naamurah, who calls himself Daarroh who also issues a warning to Spider-Man about his inminent end and that he won't stop them. Aaron realizes that he's actually one of Naamurah's kidnapped victims but before he can get more answers, Daarroh falls into a coma. Aaron brings him to the medical center, where the doctor relies his diagnosis, revealed to have been manipulated by a neural device, which she shows to Aaron, since it was something he worked before, making Aaron realize that Kaori is behind all of this.

When he arrives to confront her, she revelas that she knows he's Spider-Man and explains the truth to him: She became obsessed with saving her daughter after he told her to let her go, and after days of working Hannah revived but their encounter was short-lived as she suffered a breakdown and was suddendly possessed by something, which Aaron implies it was Naamurah. Kaori reveals that Hannah told her to build more devices and body armors for all of her victims who are now raiding the city in order to bring a start a new wave of kidnappings. Aaron runs to stop them, realizing that this is an invasion from another dimension, but he's suddendly stopped by a mysterious man who tells him that he is "The end of his story". As the last words of Naamurah's warning echoes, all of her creatures raid thorugh the city while Aaron's fate is left ambigous

• Who are the villainous Red Eye and Naahmurah? And can Aaron possibly live through Morlun’s arrival?

Retrieved from "https://heykidscomics.fandom.com/wiki/Edge_of_Spider-Verse_Vol_1_3?oldid=1426184"
Community content is available under CC-BY-SA unless otherwise noted.