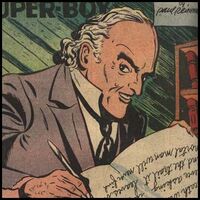 Poetry and death! What a rare combination!

Edward Fearing became a poverty stricken poet, due to being turned down by several publishers. For revenge he submitted verses to the newspaper, declaring who he would murder next (a death Jingle, if you will). His killing spree was stopped by the Wizard.

Retrieved from "https://heykidscomics.fandom.com/wiki/Edward_Fearing_(Earth-MLJ)?oldid=1586019"
Community content is available under CC-BY-SA unless otherwise noted.