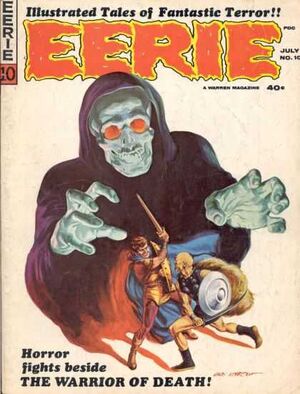 Appearing in "Warrior of Death!"Edit

Synopsis for "Warrior of Death!"Edit

1 of 6
Add photo
A warrior, Zahran finds himself dying after a long battle and is encountered by Death. Zahran deals with Death to become invulnerable so he can kill many more on the battlefield. As he gets more and more powerful, Zahran becomes drunk with power. He encounters a young boy, Valric on the battlefield but ends up being killed by him, as it ends up that Valric made the same deal with Death that Zahran had.

The story, taking place in a swamp is about monsters and their victims, which turn into creatures as well.

Astronauts in space find a hibernating dinosaur-like creature which they bring aboard and wakes up. They eventually defeat it, but it leaves babies aboard the ship.

The story, which is done in pencils only, is about a plantation owner who finds workers difficult to obtain, so a native brings him zombies in exchange for payment. The man kills him, seeking to use the zombies for free, but they come after him and turn his skin into a drum.

Appearing in "House of Fiends!"Edit

Synopsis for "House of Fiends!"Edit

A new doctor visits a young woman who is chained up by her aunt and uncle, accused as being crazy. She tells the doctor that they are a werewolf and vampire, and that their servant is a ghoul, and he has been brought here for them to kill. The doctor witnesses all three becoming the creatures she stated they were and manages to kill them all. Only it ends up that she is a witch and had tricked him into thinking they were these horrific creatures.

Appearing in "For the Birds!"Edit

Synopsis for "For the Birds!"Edit

An out of work actor finds an old man always in the park feeding the birds. He befriends the old man, with the intention of taking his money at some later point. Eventually he kills him, puts on makeup so he'll look like him, and heads out with the man's money in a paper bag where he usually stores the bird feed, but the birds end up eating him!

Retrieved from "https://heykidscomics.fandom.com/wiki/Eerie_Vol_1_10?oldid=107544"
Community content is available under CC-BY-SA unless otherwise noted.