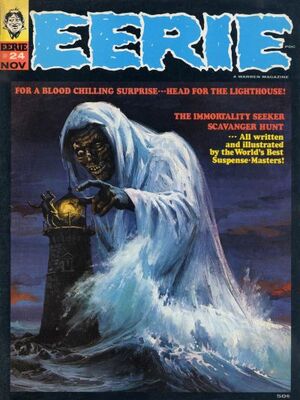 Appearing in "Head for the Lighthouse!"Edit

Synopsis for "Head for the Lighthouse!"Edit

This story features an old lighthouse keeper who enjoys telling stories of pirates to young kids. The city decides to replace the light in the lighthouse and the old man dies, but comes back as a corpse and turns things back to normal.

Appearing in "Pursuit of the Vampire!"Edit

Synopsis for "Pursuit of the Vampire!"Edit

Appearing in "The Immortality Seeker"Edit

Synopsis for "The Immortality Seeker"Edit

A man overhears another man talking of immortality, so he follows him and kills him. Taking a map from the man, he heads to a planet and kills a monster, and finally finds a computer that will give him immortality. Only the computer ends up freezing him!

A man meets an old friend at his his house, who possesses a chess set made up of demonic pieces. They play and the friend eventually wins. He tells the man that he needs to play someone every night to keep the chess set and if someone beats him they get it. But if he wins, he gets to take their soul, which is exactly what happens to our protagonist.

A short fat guy who loves the macabre keeps ruining parties, so the guests come up with a scavenger hunt of part of various monsters to keep him busy and out of their hair. He is able to find all the items however and returns to the party with them... along with the monsters they belong to!

A pair of ghost hunters arrive to help an old woman eliminate a ghost from her house. They initially have difficulty and one of them is killed, but the ghost is able to be stopped using electricity. Only it ends up the ghost was actually a victim of the old woman, who is a vampire and kills the last remaining ghost hunter.

Retrieved from "https://heykidscomics.fandom.com/wiki/Eerie_Vol_1_24?oldid=107557"
Community content is available under CC-BY-SA unless otherwise noted.