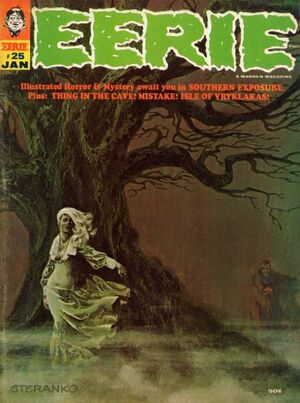 Appearing in "Isle of the Urukolakas"Edit

Synopsis for "Isle of the Urukolakas"Edit

A mob boss plans to hide from the law by faking his death in Italy. There, in his home town he bribes various people to fake his death, declare him dead, and bury him in a mausoleum in a coffin with air holes so he can live. When he awakens he tries to escape the graveyard, only for people to mistake him for a vampire and kill him!

Appearing in "Hijack to Horror"Edit

Synopsis for "Hijack to Horror"Edit

This story features a group of vampire like creatures that hijack a plane and bring it to their new Transylvania where they plan on using the plane passengers to be a never ending supply of blood for them.

Appearing in "To Pay the Piper!"Edit

Synopsis for "To Pay the Piper!"Edit

A woman faints at a family party and an old woman who hasn't spoke in years says she must be destroyed. Her boyfriend refuses to do so, but at the end of the story, it is revealed that she is a vampire!

Appearing in "The Thing in the Cave"Edit

Synopsis for "The Thing in the Cave"Edit

A young man and his wife come to visit his parents. The man, who studies fungi, as investigating a mushroom that transforms anything that touches it into a monster! When he and his wife visit a cave and approach some, he turns into a monster and kills her, exactly what he had done to a friend when he was a kid. His mother meanwhile plans on cooking dinner with the mushrooms, unaware of their power.

Appearing in "House of Evil!"Edit

Synopsis for "House of Evil!"Edit

Appearing in "Hex Marks the Spot"Edit

Synopsis for "Hex Marks the Spot"Edit

An evil man summons demons to attack those that won't sell their farms to him. But anyone who has a 'good hex' symbol at their house will cause the demon to go back and kill the one who summoned it instead of them. One such man has a new wife who demands he take down the good hex signs as she doesn't believe him. He does so, but creates another hex sign in his wheat field which results in the evil man getting his just desserts.

Retrieved from "https://heykidscomics.fandom.com/wiki/Eerie_Vol_1_25?oldid=107558"
Community content is available under CC-BY-SA unless otherwise noted.