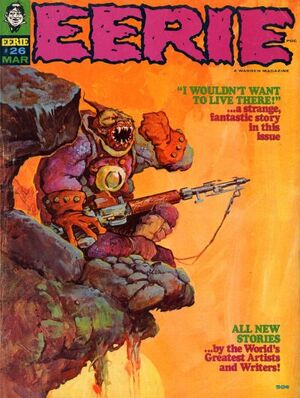 Appearing in "I Wouldn't Want to Live There!"Edit

Synopsis for "I Wouldn't Want to Live There!"Edit

The story features a trio of very ugly looking aliens who arrive on a strange planet only to get killed off due to the harsh weather there. In a plot twist that would be used many times throughout Warren's history in their sci-fi stories, the planet ends up being Earth. Ancient man sees the alien's ship, which looks like a wheel, and that is how that useful device first got introduced to our civilization.

Synopsis for "In the Neck of Time"Edit

The story's about a scientist who goes back in time and quickly becomes rich by stealing with his advanced technology. He eventually gets caught and hung.

Appearing in "Spiders are Revolting!"Edit

Synopsis for "Spiders are Revolting!"Edit

The story features a couple buying a house at auction only to find it completely infested with spiders. They try to get away from the spiders, who are trying to take over the world by possessing human bodies, but have little luck. The story ends with the protagonist in a mental institution where the spiders are finally able to get to him by infesting the doctors tending to him.

A crazy girl returns from a sanitarium years after her step mother's death and meets a boy at a carnival after being brought there by her father. When the boy is killed, the father, thinking the scarecrow is the killer, destroys it. But it ends up that ghost infested crows were the true killer after all, and with the scarecrow no longer around to scare them off...

The story features an actor playing a serial killer in a movie who goes crazy and starts killing people every time he hears a certain song from the movie.

Retrieved from "https://heykidscomics.fandom.com/wiki/Eerie_Vol_1_26?oldid=107559"
Community content is available under CC-BY-SA unless otherwise noted.