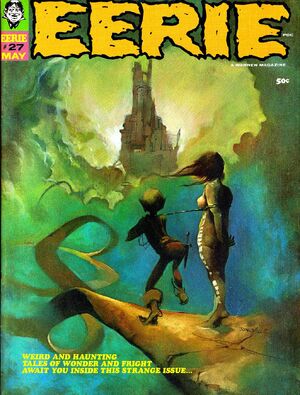 Appearing in "Journey into Wonder"Edit

Synopsis for "Journey into Wonder"Edit

This story is about an imp-like man that asks the king to let him be a knight. The king sends him to defeat a sorceress, who ends up being an innocent woman. he defeats a monster, and then after some questioning upon returning to the castle, wins a fight and transforms into a normal man.

Synopsis for "The Machine God's Slave"Edit

An astronaut finds a planet with an ancient civilization which he angers by killing a priest. They chain him to a machine which drags him along throughout the planet, and eventually to his death when it goes into a body of water.

Appearing in "Swallowed in Space!"Edit

Synopsis for "Swallowed in Space!"Edit

A spaceship of people keep vanishing until only one man is left, who finds the secret of the universe.

A man is able to deflect magic. A princess's younger sister turns her into a werewolf, and after he finds her out, he gets her turned into a pig, who is promptly eaten by some hungry people!

Appearing in "All Sewed Up!"Edit

Synopsis for "All Sewed Up!"Edit

A taxidermist turns into a werewolf. His assistant desires his fiance and steals from him, and eventually kills him while he's in his wolf form. He sews him up for display in his store, only for him to turn back human, revealing the truth to everyone.

A hooded man joins a circus with a robot woman. He hides his face, but a curious girl in the circus keep trying to see it and its eventually revealed that he has a shrunken face and his wife has a shrunken body, hidden inside the robot.

Retrieved from "https://heykidscomics.fandom.com/wiki/Eerie_Vol_1_27?oldid=107560"
Community content is available under CC-BY-SA unless otherwise noted.