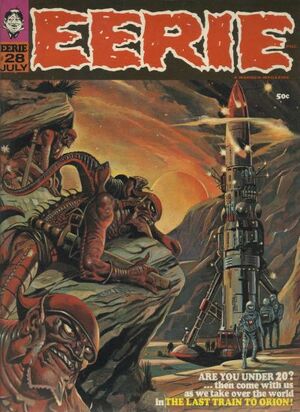 Appearing in "The Hidden Evils!"Edit

Synopsis for "The Hidden Evils!"Edit

The son of a mayor is possessed by an evil demon. The church attempts to stop him to no avail. A mysterious man named Astan arrives and says he'll be able to stop him. Through an exorcism he is able to get rid of the demon from his body. The demon swears revenge until Astan reveals that he is Satan himself, upset that the demon didn't go after a bigger target like the mayor himself.

Appearing in "The Beast in the Swamp!"Edit

Synopsis for "The Beast in the Swamp!"Edit

A barbarian eventually kills a 'monster' that ends up being an astronaut from Earth.

Appearing in "The Rescue Party"Edit

Synopsis for "The Rescue Party"Edit

An owner of a mine repeatedly puts little effort in saving the lives of those trapped in mine cave-ins, not wanting to spend too much money. When he is trapped in a cave in he finds a group trying to dig him out... the corpses of those killed before!

One of the moon astronauts apparently passes away after his spacesuit is torn apart on the moon's surface. During quarantine back on Earth the truth is revealed, germs from the moon infected him and take over the other astronauts. When the astronauts are released from quarantine a few weeks later, they're ready to infect the entire planet.

Multiple bodies disappear from the cryogenics section of the hospital. No one is able to solve the mystery, and even the Director falls victim when he suffers from a blood clot that forces him to go under cryogenics as well. It ends up that the janitor, a ghoul, has been stealing the bodies to feed his ghoul body.

Appearing in "Pit of Evil"Edit

Synopsis for "Pit of Evil"Edit

A boxer is transported to a mysterious dimension where he must fight a large humanoid creature, with the prize being a planet for a whole year as a reward.

Appearing in "Last Train to Orion!"Edit

Synopsis for "Last Train to Orion!"Edit

In the far future the young of society have taken control and either kill the old or force them to cover themselves with masks. They travel from planet to planet finding more space to live. Suddenly, an atomic mass arrives and wipes all of them out. It ends up that they, and all of humanity were just germs within the body of a giant hideous alien.

Retrieved from "https://heykidscomics.fandom.com/wiki/Eerie_Vol_1_28?oldid=107561"
Community content is available under CC-BY-SA unless otherwise noted.