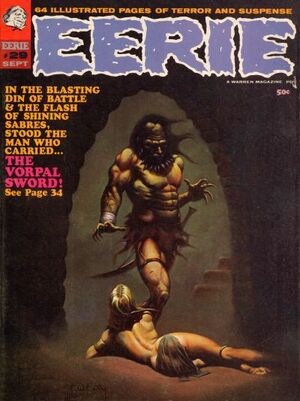 1 of 7
Add photo
A group of time travelers go through time killing people, which of course eventually results in them vanishing after doing away with their ancestors.

Appearing in "The Fiend Planet"Edit

Synopsis for "The Fiend Planet"Edit

Astronauts head through space for a hundred years to reach a colony planet, but when they reach it they find bizarre creatures and many end up getting killed. It later becomes apparent that the creatures are actually humans who came to Earth long before due to advanced technology, changed in appearance due to adapting on the planet.

A warrior uses a weapon provided to him by his dying father, the Bloodstaff to fight a woman in the woods who is killing people to feed a vampiric plant. He soon discovers that she didn't kill his allies through, his bloodstaff did. He soon dies himself, appearing in an impish form to those around him.

Appearing in "The Gallery of Horror"Edit

Synopsis for "The Gallery of Horror"Edit

A writer buys a haunted house hoping to draw inspiration from it. He finds horrific paintings inside which were actually the inspiration for classic stories by Poe and other authors. The house is clearly haunted however, and even a dog he obtains ends up dead. He destroys all the paintings, thinking they are responsible, but it is actually a giant spider living on his ceiling that is responsible for the horror within.

Appearing in "The Vorpal Sword"Edit

Synopsis for "The Vorpal Sword"Edit

A young warrior is given the 'Vorpal Sword' by a wizard and heads off to save the wizard's daughter. He rides a giant slug as he heads through the medieval landscape. It soon becomes apparent that the sword transforms to a beautiful woman, Nina whenever he says her name. When he finally faces his enemy, she saves him by using a dagger... which ends up being their son!

This story is about a poor man who buys a mirror for his wife which ends up being a gateway to another dimension; a paradise as long as the person who comes there has a good heart. The man and his wife head there to live the rest of their life.

A group of men head to the snowy mountains where it is rumored the abominable snowman lurks. As they soon discover however, its not a snowman, but rather werewolves that are occupying the mountain.

Retrieved from "https://heykidscomics.fandom.com/wiki/Eerie_Vol_1_29?oldid=107562"
Community content is available under CC-BY-SA unless otherwise noted.