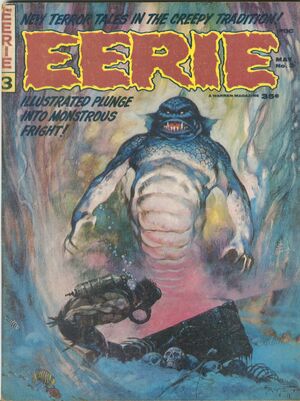 Appearing in "Soul of Horror!"Edit

Synopsis for "Soul of Horror!"Edit

1 of 7
Add photo
A devil worshiper is killed by the townsfolk but is able to reincarnate himself in a newborn baby. By drawing the life out of the baby's father he is able to quickly grow into an adult and take revenge on those who killed him. The town doctor is able to kill him, only for him to be reincarnated once again in the doctor's newborn baby.

A publisher goes to see a writer of his who has been staying in a Lighthouse. Along the way he meets a woman who ends up falling off a cliff. He finally meets the writer to find out that he's the one the woman was looking for. Apparently the writer's grandfather got drunk, resulting in the death of a woman. A ghost of the woman, who was the person the publisher met earlier shows up and kills the writer. Her skeleton is found on top of his corpse the next morning.

Appearing in "Room with a View!"Edit

Synopsis for "Room with a View!"Edit

A hunchback helps a mad scientist create a Frankenstein-like monster by stealing corpses. When the creature comes to life the scientist tells it to kill the hunchback, but the monster kills him instead, as the brain implanted in him was the hunchback's brother's.

Appearing in "Under the Skin!"Edit

Synopsis for "Under the Skin!"Edit

An unsuccessful actor envies another actor who's able to get great roles due to his horrific makeup. By murdering the actor and stealing his technique, he is able to get a great role, but is unable to take off the makeup when he's done. It ends up that he hallucinated the whole thing, and ends up tearing all the skin off his face.

A design firm owner convinces an aged architect build a house for him, by telling him that it will be his house. He kills him when it nears completion. Upon laying in his bed for the first time, he is killed by machinery in the house, which the architect had intended to be his tomb upon completion.

A pair of brothers are hired by an old man to find a treasure chest in the ocean depths and kill the old man once discovering it. Upon opening the chest however, a demon comes out and kills one of them, causing him to transform into a demon himself. One of the brothers survives and is put in an institution, but transforms into one of the demons upon being given a hot and cold bath shock treatment.

Retrieved from "https://heykidscomics.fandom.com/wiki/Eerie_Vol_1_3?oldid=107537"
Community content is available under CC-BY-SA unless otherwise noted.