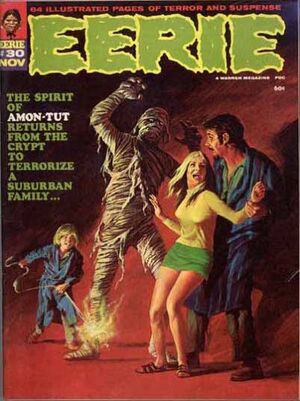 1 of 7
Add photo
A young man is invited to a town run by a Baron, who offers him eternal life if he becomes a king, working under his influence. The young man refuses since the drink the Baron gave him already gave him eternal life and he has no reason to be loyal to him. The Baron has his minions eat him, and he is turned into a scarecrow!

October Weir solves a case regarding a man who was killed by a demon. His travels bring him and his wife into a mirror to a separate world where things are backwards.

Astronauts arrive at a destroyed planet and piecing together a habitat of the planet. It ends up the planet is Earth, but the interesting twist is they put together a car and think it was the dominant species of the planet!

The story features a man picked up by gypsies who was turned into a werewolf by a vampire. He battles the vampire while he's a werewolf and manages to defeat him.

Appearing in "In Close Pursuit"Edit

Synopsis for "In Close Pursuit"Edit

A man makes a lot of money using cheap material to build a skyscraper and got it blamed on his partner, resulting in him getting off scott free. However he ends up being pursued by someone after getting off a bus and falls to his death while running from him. Only it ends up that the man meant no harm in the first place.

Appearing in "The Return of Amen-Tut!"Edit

Synopsis for "The Return of Amen-Tut!"Edit

A mummy is excavated and brought into a museum. He comes back to life and seeks to commit murder, but the boy of one of his prospective victims pulls the wrappings off of him, reducing him to dust!

A doctor seeks to create life, has a hunchbacked minion kill a former assistant, only for the assistant's brain to end up in his creation and kill him.

Retrieved from "https://heykidscomics.fandom.com/wiki/Eerie_Vol_1_30?oldid=107563"
Community content is available under CC-BY-SA unless otherwise noted.