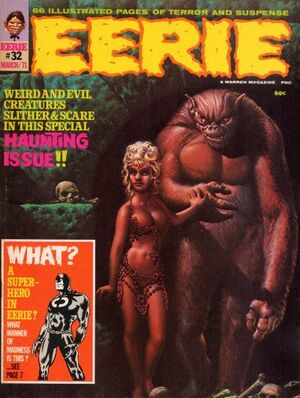 The story features a superhero battling crime in the city. The local mob does all they can to stop him, even sending an expert hit man after him, but he fails as well. At the end of the story it is revealed that the superhero is a vampire. The local cops worry about what will happen if the city runs out of criminals.

Appearing in "The Warning of the Hawk!"Edit

Synopsis for "The Warning of the Hawk!"Edit

A pair of explorers in the mountains find a hidden cave with a hawk-like man, frozen, and various advanced technological devices. One of the men, seeking to get rich off the devices, thaws the hawk-like man, and kills his companions. He nurses the hawk man back to health with the promise that he'll explain the devices. They leave the cave and come across the flying saucer the hawk man came to Earth in. The hawk man kills the explorer however and eats him so he'll be strong enough to fix his ship.

Appearing in "The Wailing Tower"Edit

Synopsis for "The Wailing Tower"Edit

This story features a man who is in a plane crash but is rescued by monks who live near a tower they call "The Wailing Tower". Seeing the jewels in their possession, the man steals them, but is caught, and flees from them into the tower. He reaches the top where he discovers that the monks have been worshiping Satan!

Appearing in "I Fell For You"Edit

Synopsis for "I Fell For You"Edit

A girl yearns after a rich singer who she had spurned in her youth. The two get married, but she plots with his agent to have him killed by falling out of a plane. That happens, but his body falls on their car, causing a crash that kills all of them.

A man is deathly afraid of dying and rotting away, so he deals with Satan to live forever. He lives forever, but ages as normally and at about 200 years old collapses in the desert because his body is so decrepit. When vultures start attacking him he willingly submits himself to Satan.

This story features astronauts who land on a frozen planet. Before long however, the temperature starts rising tremendously and beasts appear. They try to escape to no avail. It ends up that they landed in a freezer that was being defrosted.

Retrieved from "https://heykidscomics.fandom.com/wiki/Eerie_Vol_1_32?oldid=107565"
Community content is available under CC-BY-SA unless otherwise noted.