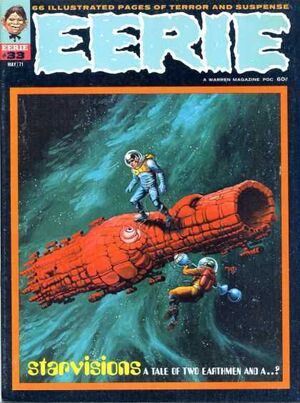 Appearing in "A Trip in Time!"Edit

Synopsis for "A Trip in Time!"Edit

A man creates a time machine, thinking that his appearance in the past will have no impact. And it doesn't, because as he arrives in the past, he and his time machine quickly vanish entirely!

A man finds a book which will cause anyone whose name is written in it then consequently burned to vanish. He does so to an enemy of his, but then becomes paranoid that the police are after him and destroys the book in a fire, having forgotten that he wrote his own name in it!

Appearing in "Whom the Gods Would Destroy"Edit

Synopsis for "Whom the Gods Would Destroy"Edit

A well written story about a battle consuming all who remain on Earth. It is eventually revealed that our heroes are battling only a hospital with self-defense forces, and soon only two are let, who die as well.

Appearing in "Escape into Chaos"Edit

Synopsis for "Escape into Chaos"Edit

This story is about a man who keeps being plagued by bugs and other monsters, yet forgets about it and encounters the same fate over and over.

A bizarre story about a large funnel like creature that appears to be made up of many stones that encounters a few stranded astronauts which it believes are just a figment of its imagination.

A bug killing device is created that uses toxic gas, and causes problems for ill adults or children. Its creator is getting rich off of it and could care less until he turns into a bug himself, well at least thinks he does, and dies of a heart attack.

Appearing in "The Painting in the Tower!"Edit

Synopsis for "The Painting in the Tower!"Edit

An evil baron takes an artist's daughter and has his hands cut off when he refuses payment. The girl hangs herself soon after. The baron sees her corpse come back to life and lead him to a part of his castle where the father's chopped off hands paint a picture of him being tortured, and he slowly vanishes as the painting is completed.

Retrieved from "https://heykidscomics.fandom.com/wiki/Eerie_Vol_1_33?oldid=107566"
Community content is available under CC-BY-SA unless otherwise noted.