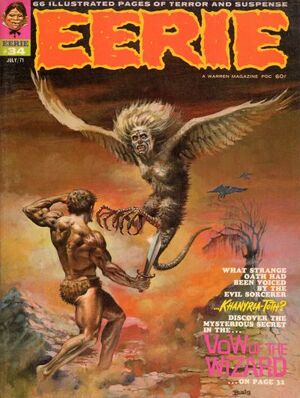 Appearing in "Parting is Such Sweet Horror"Edit

Synopsis for "Parting is Such Sweet Horror"Edit

1 of 7
Add photo
This story features a man whose twin brother is a hideous mutated monster. The man tells his lover that he's killed his brother but is obsessed about there being a link between them. She brings him to a mansion to convince him that no such link exists, but the monster brother ends up being there, and absorbs her, then kills his brother.

Appearing in "Eye of Cyclops!"Edit

Synopsis for "Eye of Cyclops!"Edit

This story features a rich Scottish Baron who is killed by the townspeople. He swears revenge, but he is refused the ability to do that in hell, which just ends up being his personal hell to him.

The story features an astronaut who kills his fellow astronauts and eats them when they run out of food. He arrives on an alien planet, where the plants eat him!

Appearing in "The Vow of the Wizard"Edit

Synopsis for "The Vow of the Wizard"Edit

A wizard tells a warrior that he'll take his woman from him someday. The warrior battles a harpy, but it ends up that it was his lover, transformed by the wizard!

Appearing in "The Sound of Wings"Edit

Synopsis for "The Sound of Wings"Edit

The story features a pair of men in the desert who come across a journal. The journal tells of a man who summoned a demon to kill the man who was going out with his daughter, whom he felt unworthy of her. He is killed, but upon finding out that his daughter needs to be sacrificed, he runs away to the desert, where he dies. They don't believe the story, but the ending shows the giant footprint of the bird demon.

Appearing in "Lair of the Horned Man"Edit

Synopsis for "Lair of the Horned Man"Edit

The story features a native American chief fighting a horned beast to save a woman. It ends up that the beast was created by the local medicine man, who changes the woman, his daughter into a snake to fight him. She ends up biting her father, killing him.

Retrieved from "https://heykidscomics.fandom.com/wiki/Eerie_Vol_1_34?oldid=107567"
Community content is available under CC-BY-SA unless otherwise noted.