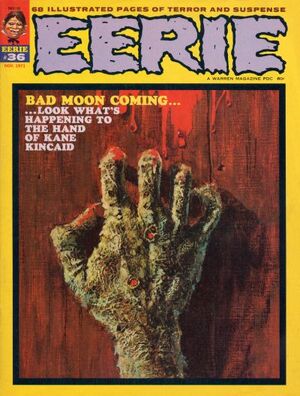 Appearing in "Bad Moon on the Rise"Edit

Synopsis for "Bad Moon on the Rise"Edit

1 of 7
Add photo
This story surrounds a series of murders taking place by a werewolf. The werewolf is suspected as being the killer and is finally confronted on the night of the full moon. But an eclipse causes him to turn into a human and is killed, with the detectives thinking that the werewolf is still out there on the loose.

Appearing in "The Silence and the Sleep"Edit

Synopsis for "The Silence and the Sleep"Edit

A jealous man kills the boyfriend of a woman he likes. She is so shocked that she becomes mute and is put in an institution. The killer, a piano player, hopes to keep the secret, but is eventually found out and arrested.

This story, done completely in pencil, features Skeates's recurring character Targos, who is captured by odd looking sea creatures who create a robot clone of him to attack Atlantis.

Appearing in "Look What They've Done!"Edit

Synopsis for "Look What They've Done!"Edit

This unique story breaks the fourth wall, having the lead character argue with the writer and plead to the reader. A hippie, he refuses to go along with the plot, and ends up getting killed by an alien.

Natives kill crocodiles for a scientist experimenting on the natives, trying to turn them into powerful crocodile men. He finally finds the solution, but his former assistant, one of the natives, turns on him and injects it into him. He turns into a crocodile and heads outside, only to be killed by other natives who seek to turn him over to the scientist!

A disgraced detective locks himself in a crypt with another man, telling him he'll only get the key if he kills him. He presses on the man until he finally kills him, only for that man to discover that there is no key, and hence no way out. The detective wanted to solve a crime and punish a criminal so much that he did it by getting himself killed!

Two monsters arrive in modern time and are promptly killed by the police. The story takes a step back to explain things, that these monsters were actually responsible for the creation of humanity when they tampered with time and screwed up their own history, erasing it and resulting in humans having control of the Earth.

Retrieved from "https://heykidscomics.fandom.com/wiki/Eerie_Vol_1_36?oldid=107569"
Community content is available under CC-BY-SA unless otherwise noted.