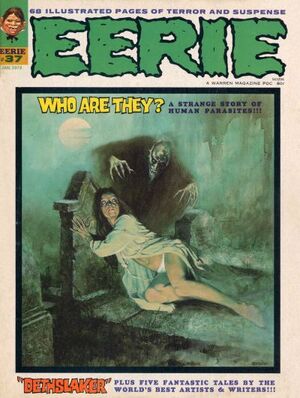 Appearing in "The Other Side of Atlantis"Edit

Synopsis for "The Other Side of Atlantis"Edit

1 of 5
Add photo
The story is about Targo, the prince of Atlantis, who ends up going to a dangerous part of the ocean while his mind's on other subjects. His girlfriend looks for him on the surface to no avail. Targo turns into something, although it's not revealed what as the story ends.

Appearing in "Horror at Hamilton House"Edit

Synopsis for "Horror at Hamilton House"Edit

A man marries a woman in order to bump her off and take her money. She tells him that they can't leave the castle they are in because her family has been cursed. He eventually does kill her, but her son kills him, having turned into a werewolf due to the family curse.

Appearing in "The Ones Who Stole it From You"Edit

Synopsis for "The Ones Who Stole it From You"Edit

A crook steals money from a client then makes him appear to have commit suicide. The victim's son tries to find out the truth about what happened to his father. Meanwhile, a cannibal also has a part to play in the story, having eaten the victim's corpse.

Appearing in "A Rush of Wings"Edit

Synopsis for "A Rush of Wings"Edit

This one's about a entomologist who finds a new species of butterfly in Burma by the ruins of a large city. He murders his assistant, wanting all the credit to himself, then heads to the city against a native's warning where a giant butterfly monster kills him.

A man seeks to kill a sorcerer using his sword, 'Dethslayer'. He succeeds, then kills the king, but is killed when he puts the crown on and an angry mob, thinking he's the king, kills him.

Retrieved from "https://heykidscomics.fandom.com/wiki/Eerie_Vol_1_37?oldid=107570"
Community content is available under CC-BY-SA unless otherwise noted.