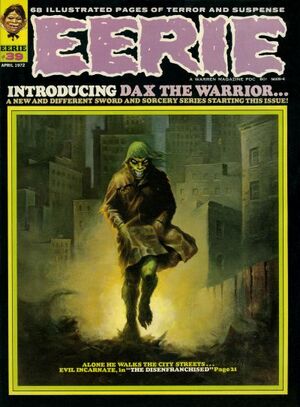 1 of 5
Add photo
A man passing a hat shop one day finds a head dummy that looks almost real. The man becomes obsessed with the head and passes it each day as it goes to work. After a while passes though he notices the head decomposing. The man tries to get himself to stop looking, but he can't control himself and the head gets worse and worse looking. Eventually he confronts the owner of the shop, who hadn't realized that the head was rotting and replaces it by chopping off our protagonist's head.

A gigantic man is discovered in the hills one day. The giant slowly shrinks until he becomes the size of a normal person and joins society. While there he meets a woman and after having sex he leaves, telling her their child will leave her someday. The man disappears into the mountains, still shrinking. Years later the son finds himself shrinking too.

A boy is permanently scarred after his father's butcher shop is closed down, his father dies, and he is evicted from his home. The boy wanders the streets with a huge grin on his face, carrying a cleaver with him that has replaced one of his hands.

Appearing in "Dax the Warrior"Edit

Synopsis for "Dax the Warrior"Edit

Dax meets a woman, Freya, who is captured by a winged demon. Dax fights the demon and is able to rescue her, but her body becomes ravaged with leprosy.

Appearing in "Yesterday is the Day Before Tomorrow"Edit

Synopsis for "Yesterday is the Day Before Tomorrow"Edit

A thief living in an advanced society steals a time machine and goes 30 years in the future so he can steal invention blueprints and patent them in his own time. The only problem is the blueprints he steals end up being from his future self, whom he murders, not knowing the truth until he returns to his own time.

Retrieved from "https://heykidscomics.fandom.com/wiki/Eerie_Vol_1_39?oldid=107572"
Community content is available under CC-BY-SA unless otherwise noted.