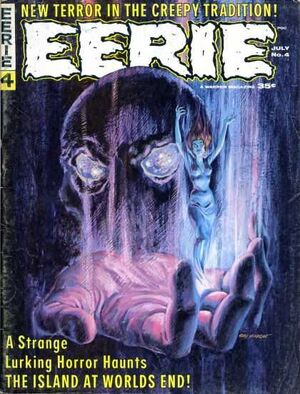 Appearing in "House of Evil!"Edit

Synopsis for "House of Evil!"Edit

A man comes to a large house where his brother lived but finds only a tape recording there, telling him of how he came to the house, which has an evil past, for inspiration. Suddenly a rotting corpse arrives. The man destroys the corpse, but soon finds that it was his own brother! He then looks at his hands and realizes that he's starting to rot as well.

A pair of doctors are working on a poison for killing rats. One of them ends up dying when the rats attack him. The other doctor follows them into a large maze of tunnels. When he finds a number of rats coming after him he shoots at them with a gun, but that caves in the cavern and the rats completely overrun him.

The man of the title is in a mental institution, a man who does nothing but scream like crazy and act like a maniac. An employee at the institution becomes fascinated with him and ends up letting him out by accident when he can't control him. The screaming man goes crazy and ends up killing our hero's boss, for whom he was originally his boss, who was killed by him and brought back to life.

A man seeks to make a woman fall in love with her, so he has a sorcerer cast a spell so that will happen. Only when he returns to see her, he finds that she has died! Soon afterwards however she comes back to life as a vampire, and being in love with him stays by his side. While he initially likes it, he is troubled by what she is doing, so he uses a stake on her and chops off her head. But even that isn't enough to stop her from coming back to him!

Appearing in "Island at World's End!"Edit

Synopsis for "Island at World's End!"Edit

A man lost at sea, Sturgis is found by a boat and tells his story. His ship was taken over by a mutiny and he escaped on a lifeboat. Eventually he is on his own and he comes across an island where he encounters beast men. They carry him to a large pit where sacrifices are made. A beautiful woman, Cythlla, who tells him she is the last of an elder race appears and rather than killing him she wants him to be her mate. She worships 'Shoggoth', a mysterious giant entity that appears. Seeing how evil she is, he runs off and shoots her. Eventually however Shoggoth returns to claim him on the boat.

Retrieved from "https://heykidscomics.fandom.com/wiki/Eerie_Vol_1_4?oldid=107538"
Community content is available under CC-BY-SA unless otherwise noted.