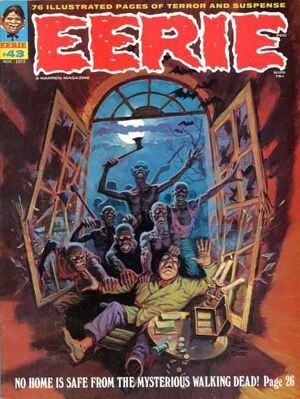 The story features a bomb being placed on Earth in the far past from alien astronauts, who decide to not detonate it and leave the Earth in peace. Many years pass and the bomb is discovered, so it is launched into space with a single man who is responsible for detonating it at a safe distance. He lands on another planet and is able to detonate it after some trouble with the people there.

A man about to be executed suddenly finds himself transported to another dimension where he will be king. He succeeds in defeating a monster, but just as things are getting good, he is back in the real world and is executed.

The story features a plantation owner who uses a lot of dead corpses, revived from the dead, to do work for him. One of the dead man's brothers arrives and wants to take him away from there. The plantation owner refuses and in a struggle with the brother is killed. But this results in all the corpses rotting away to nothing since their summoner is dead.

The story features a man, whom is a slave on the run, being hunted by his masters. At the end it ends up that the masters are actually beast-like people.

An expert gunman is confronted by a mysterious man and killed by him.

Appearing in "Let the Evil One Sleep"Edit

Synopsis for "Let the Evil One Sleep"Edit

Dax, heading through the desert suddenly finds himself in a beautiful landscape and meets a beautiful woman, Lilith who keeps calling him Adam. She tells him of an evil one who sleeps nearby. Demons eventually arrive and attack her. Dax finds himself paralyzed but is eventually able to move and kills them all. Dax is convinced that he must kill the evil one and goes to it, only to find it is himself! He is suddenly in the desert again, making one wonder if it was all a hallucination.