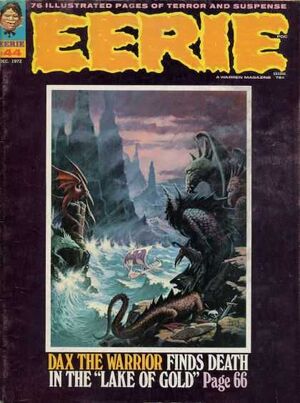 An aged western movie star has gone a little crazy in his old age. By the end of the story he's killed his wife, a fan, and even himself.

A man seeks to live forever, so he willingly lets a vampire drink his blood. After being buried, he rises from his grave, only to die because his gravestone creates the shadow of a cross.

Appearing in "The Thrill of the Hunt"Edit

Synopsis for "The Thrill of the Hunt"Edit

A man is hunted through the woods after killing an agent from the electric company who wanted the trees trimmed near the electric lines. Although he kills many of his pursuers, the wilderness eventually wears on him and he ends up getting electrocuted when he jumps into an electric line from out of a tree.

Appearing in "Hand of the Discarnate"Edit

Synopsis for "Hand of the Discarnate"Edit

Two brothers go to see a medium who ends up summoning their father's spirit, who gets them to fight and kill each other.

A man thinks his alarm clock, Alan, is alive, and goes crazy when he accidentally breaks it.

Appearing in "Tiller of the Soul"Edit

Synopsis for "Tiller of the Soul"Edit

An old farmer who is a loner comes across a dead man buried in his farm that talks to him. The dead man befriends him, but when he digs him up, he discovers that the dead man is himself!

Appearing in "Lake of Gold!"Edit

Synopsis for "Lake of Gold!"Edit

A group of slave traders come across an island occupied by Dax and a number of beautiful women. Dax tells the slave traders of riches in the nearby lake. They head there, where Dax destroys the bottom of their ship and the women all turn into fish like demons that kill all the slave traders.

Retrieved from "https://heykidscomics.fandom.com/wiki/Eerie_Vol_1_44?oldid=107577"
Community content is available under CC-BY-SA unless otherwise noted.