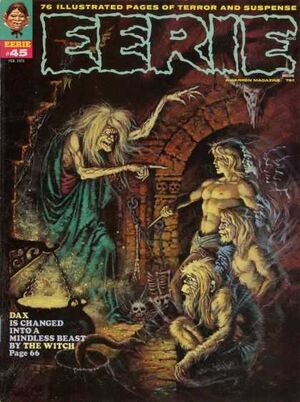 A comet crashes into Earth, causing a mysterious mound to appear. At this time humanity is battling an onslaught of bugs that are threatening to destroy mankind. Fearing the mound contains the bugs' savior, mankind has it blown up. But it instead contained mankind's savior, a giant anteater, and by killing it mankind seals its own fate.

Appearing in "Ri, Master of Men"Edit

Synopsis for "Ri, Master of Men"Edit

In the future mankind creates a massive computer, Ri, which is made ruler of the world. Ri also starts taking over people's minds, turning them into zombies. A group of people head off into space to escape Ri, eventually landing on the moon. There they find an advanced group of people... and Ri, who is still in control.

Appearing in "When Wakes the Dreamer"Edit

Synopsis for "When Wakes the Dreamer"Edit

A man dreams about a world where cities and people are vanishing and a weird werewolf like monster appears. The dreamer wakes up, finding that the same thing is happening in the real world.

Appearing in "A Blade for the Teacher"Edit

Synopsis for "A Blade for the Teacher"Edit

A powerful warrior seeks to fight his old master in battle to prove himself even more than his current elevated status. He recalls the statues of powerful warriors his master taught from when he was a student. He eventually finds the master, who permits him to join the statues by turning him into one.

An artist murders a woman who is trying to blackmail him. When he leaves he finds himself driving in a landscape like one of his paintings. There he sees the woman he killed, who bites his head off. In reality he gets into a car crash and is killed, although the police find his head missing when they come to the crash site.

A witch captures Dax and his men, seeking to steal their hearts and restore her lost youth. She also turns Dax into a ape like creature. Dax in his ape form kills a snake and puts its fangs into the heart of a nearby warrior. When the witch takes the hearts she becomes young again and restores Dax to his normal self. The poison injected into the hearts by the fangs kill her seconds later however.

Retrieved from "https://heykidscomics.fandom.com/wiki/Eerie_Vol_1_45?oldid=107578"
Community content is available under CC-BY-SA unless otherwise noted.