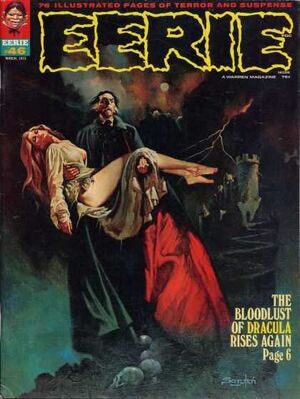 Appearing in "And an Immortal Died"Edit

Synopsis for "And an Immortal Died"Edit

1 of 6
Add photo
Dracula is sent to a sea port in the early 1900's where he takes over a ship and encounters a haggard witch whose been eating hearts to stay alive. After the Conjuress (a powerful being who was also from the Vampirella series) is killed by her, Dracula kills both the witch and her assistant.

Appearing in "The Things in the Dark"Edit

Synopsis for "The Things in the Dark"Edit

A tyrannosaurus rex runs amok in Tokyo, and manages to wipe out all of human society only for things to start all over again millions of years later.

Appearing in "The Root of Evil"Edit

Synopsis for "The Root of Evil"Edit

A bum is hired by a scientist to take part in an experiment to help humans be able to breath carbon dioxide. As the days go by, his body slowly turns into a tree while a nearby plant becomes more and more human. Eventually the tree-man is unleashed on society, but is luckily able to be stopped.

Appearing in "Planet of the Werewolves"Edit

Synopsis for "Planet of the Werewolves"Edit

A trio of astronauts come across a planet overrun by werewolves, except for a single man, who they bring aboard. One of the astronauts is killed while repairs are being done. Eventually the other two discover the truth, that the man they brought aboard is a vampire, who's going to get them to take him to Earth.

Dax encounters a cyclops giant and the wizard controlling him. Dax refuses the wizard's offer to take his place and defeats both him and the cyclops.

Retrieved from "https://heykidscomics.fandom.com/wiki/Eerie_Vol_1_46?oldid=107579"
Community content is available under CC-BY-SA unless otherwise noted.