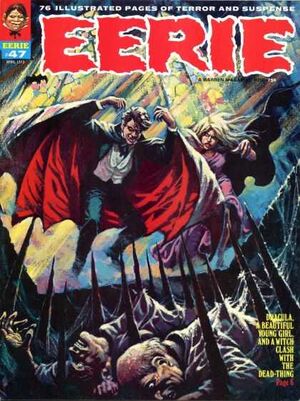 Appearing in "Enter the Dead-Thing"Edit

Synopsis for "Enter the Dead-Thing"Edit

1 of 5
Add photo
Having bitten the witch and her assistant, they are now vampires along with Dracula on the ship departing from San Francisco. A rotting corpse kept in a coffin on the ship ends up coming to life and wreaking havoc, forcing Dracula and his underlings to turn into bats and escape, heading to Transylvania. There, a man with a shotgun fires upon Dracula.

The tale of Lilith, Adam's first companion and her quest throughout history to find him and Eve so Satan will restore her lost beauty.

A man, Kari, dying in the desert is saved by Jerimiah, a man who has transformed into a snake man. They go on a quest to find a snake god, Slikandai and successfully find him. Slikandai turns Jerimiah back to a real man, but Kari is forced to become a sacrifice for it to occur.

Appearing in "The Message is the Medium"Edit

Synopsis for "The Message is the Medium"Edit

A man kills his wife, but later encounters her when he takes part in a seance with his lover.

Dax encounters a beautiful woman with sparkling skin who is a slave to a barbarian on the planet Gemma-5. Dax defeats the barbarian and saves her, and later encounters even more barbarians and fights them. The woman escapes by heading into a body of water where she goes into a spaceship and blasts off into space. It seems that like Dax, she too was an alien to the planet and decides to save it from colonization due to her encounters with Dax.

Retrieved from "https://heykidscomics.fandom.com/wiki/Eerie_Vol_1_47?oldid=107580"
Community content is available under CC-BY-SA unless otherwise noted.