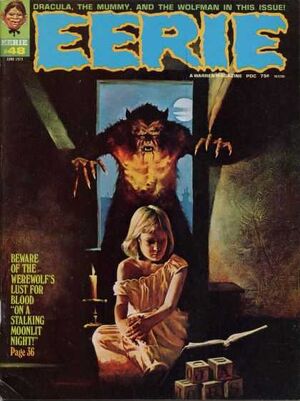 Appearing in "The Son of Dracula"Edit

Synopsis for "The Son of Dracula"Edit

This continues from the last issue's Dracula story, where Dracula was shot by a man with long white hair. This story, told mostly in flashbacks explains about a woman who Dracula met and fell in love with, and who eventually died, but not before giving birth to his son. The end of the story reveals that the white haired man in the present was this son.

Appearing in "And an End"Edit

Synopsis for "And an End"Edit

This story is about a man, Michael, who finds an amulet that enables him to occupy the body of a mummy. After an argument with his girlfriend, he occupies the mummy's body and kills both her and his colleague whom she was kissing. Upon returning to his human body, he finds the amulet missing however, and his mummy body is burned, killing him. The epilogue introduces a man, Jerome Curry, who finds the amulet years later, which the remainder of the series is about.

Appearing in "Think of Me and I'll Be There"Edit

Synopsis for "Think of Me and I'll Be There"Edit

A woman whose lover died in a car crash is demonstrating telekinetic abilities.

Appearing in "On a Stalking Moonlit Night"Edit

Synopsis for "On a Stalking Moonlit Night"Edit

This story features a man, Arthur Lemming, who becomes a werewolf during the full moon. In his human life he argues constantly with her wife and discovers she's having an affair. As the story ends, he becomes a werewolf again, goes on a rampage, and ends up killing his daughter.

Appearing in "The Resurrection Man"Edit

Synopsis for "The Resurrection Man"Edit

This story is about a man who brings a girl back to life, but she ends up going crazy. His wife tells the story to a reporter who says he's going to make it public, so she kills him, revealing that she was brought back from the dead too.

Dax encounters a tribe that sacrifices people to a winged monster. Dax kills the winged monster, but the tribe continues to sacrifice people and he agrees to not tell them of its death since it would damage their religious beliefs.