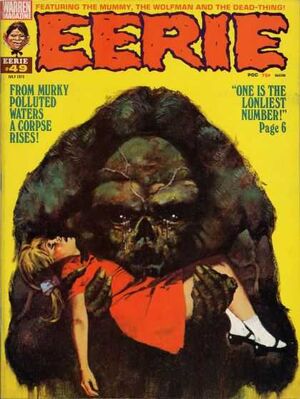 Appearing in "One is the Loneliest Number"Edit

Synopsis for "One is the Loneliest Number"Edit

This story is a parody of the swamp thing, featuring an ignored man who kills himself by jumping in the river, but he comes back to life as a horrific monster. He returns to work, scaring a bunch of people, and eventually befriends a girl who is killed when people try to kill him. He throws her in the river and she becomes a swamp monster just like him!

Appearing in "The Death of a Friend"Edit

Synopsis for "The Death of a Friend"Edit

This story takes place in Boston, where Jerome Curry (who appeared at the end of the prior story) occupies a mummy using the amulet he found and kills a couple. His girlfriend's brother is a witness to the murder, but by the end of the story, the mummy walks again and claims him as another victim.

In this segment, Arthur Lemming returns to his human self, not knowing that in his werewolf form he had killed his own daughter. He confronts the man his wife has been sleeping with during a meeting, and the man, lying, accuses Lemming's wife of being a witch, which is promptly believed by everyone after Arthur transforms back into a werewolf and attacks them. By the end of the story Lemming has killed his wife's lover, but the questions surrounding his wife still linger on.

The government puts into place population control in the future by killing select people. Of course one of the protagonists ends up being chosen as one of the people who has to die.

The story features an extremely paranoid man who goes so over the edge that he ends up killing his own daughter and her lover when he mistakes them for people stalking him.

Dax comes across a large castle and comes across a beautiful woman inside, who as a vampire is accidentally killed when she is caught within the shadow of the hilt of Dax's sword (which forms a cross). Her father, also a vampire confronts him over her death and transforms into a creature which Dax fights and eventually beats when he unknowingly lures him outside into the sunlight.

Retrieved from "https://heykidscomics.fandom.com/wiki/Eerie_Vol_1_49?oldid=107582"
Community content is available under CC-BY-SA unless otherwise noted.