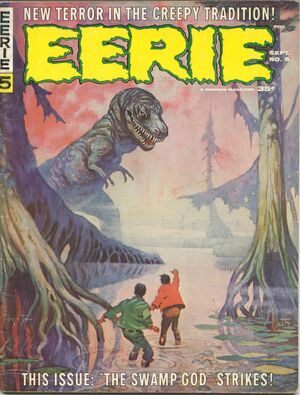 Appearing in "The Mummy Stalks!"Edit

Synopsis for "The Mummy Stalks!"Edit

1 of 7
Add photo
A mummy that turns into a werewolf while being stored in a museum.

A trio of men slay a witch doctor only for the woods to come alive and kill them all.

A sorcerer summons a woman from the dead, despite the warnings of his old master. When she ends up being crazy, he casts a spell that makes her dead again, only to suffer the same fate himself, since he was raised from the dead by his master!

Appearing in "A Matter of Routine!"Edit

Synopsis for "A Matter of Routine!"Edit

A man coming home from work one day enters his house and suddenly finds himself in the land of the dead, being tortured by demons. The demons realize that he isn't really dead yet and shouldn't be there, so he returns to his own life, forever fearful of what will happen when he comes home.

A doctor brings a criminal back from the dead to steal from his patients at random so he can afford expensive things for his wife. Only she ends up becoming one of his victims!

Appearing in "The Swamp God!"Edit

Synopsis for "The Swamp God!"Edit

A pair of hunters go to a swamp to hunt 'The Swamp God', that the natives had been sacrificing their people to. Their guide summons the God, a giant Tyrannosaurus Rex, whom he gets to eat both of the hunters, as he's now getting all outsiders to sacrifice to the God.

A vampire slayer meets a beautiful woman whom he suspects is a vampire, but she proves she isn't one by showing herself in a mirror. He sees her again unarmed, only for it to be revealed that she was a vampire all along, and her twin sister, a ghoul was the one seen in the mirror. They both feast upon him.

Retrieved from "https://heykidscomics.fandom.com/wiki/Eerie_Vol_1_5?oldid=107539"
Community content is available under CC-BY-SA unless otherwise noted.